France shuts down, UK set to burn: The Western catastrophe 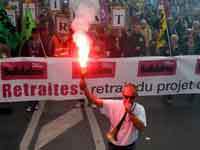 What we are witnessing with the mass disorders in France is what we tasted in Greece all spring and summer and what will rock the West in greater and greater ferocity.

For those who have not been paying attention, the shut downs, the walk outs and the break downs of Greece have spread now to France. The trigger? A broke, over extended government, already straddled with suffocating high taxation decided to raise the retirement age from 60 to 62.

Instantly, millions hit the streets, shutting down business and movement. Walkouts at the airports have shut down flights, while work stoppages at oil refineries and fuel depots threat to paralyze not only the economy but also emergency services. Panic buying and hording has already begun. Basically, French society is in paralysis just like Greece was for most of this year.

One poll showed that 70% believe that this will build into the same massive protests of 1995 and over half the population support this. What none are thinking about is the cost of that protest or the fact that their demands of long and easy retirement are unrealistic, always were and unsustainable.

Al Jazeera's reporter, Jacky Rowland, was quoted as stating ""French workers have campaigned long and hard for their rights and benefits, and they won't give them up without a fight," she said" She is right, they will fight and enjoy themselves right up to the third world economic collapse, all else be damned.

In Spain workers shut down production, freezing the country's economy and costing billions of Euros that that broken and bankrupt government also can not afford. Transportation and such were equally shut down.

The real show will, of course come in England. The new pseudo conservative government in England has announced that it will cut 40% of the budget, in order to reign in the 13% deficits. Of course this will translate in mass unemployment of the public sector and no alternatives in the private sector, as there are no plans to equally remove high taxes, high regulations and non-existent outsourcing barriers to China, that would actually encourage private business and industry to open plants and absorb the cast offs of the biggest employer in the UK: government.

The workers of course understand that, but instead of fighting and pushing the so called conservatives to actually free the economy, not just cut spending, they are indeed fighting for the continuation of the ruin that they all face. The UK is a broke 2nd world economy, rapidly economically, morally and culturally sliding into a failed state.

The government unions, first why does any government allow gov employee unions is insane to behold, have flatly stated, they will shut the country down and set it on fire. Well t-time is coming and coming rapidly: the Spring of British Discontent. Of course, the fact that without such actions, even these imperfect actions, by summer time next year, the UK economy will be in absolute free fall and these same bureaucrats and workers will not be getting paid anyways, is beyond their comprehension or cognizant abilities.

Similar strikes are further breaking out in Slovakia, again in Greece, and the capital of that frankenstinian state of the EU was equally rocked.

The communists are ecstatic, knowing that soft socialism always leads to this. Cradle to grave care is always expensive and steady growth in taxes, along with the strangling demands of the watermelons (green activist on the outside, red Marxist on the inside) have made sure that tax revenues shrink, not grow, as business flees.This of course leads to a crushing of the cushy expectations of the masses and the mass protests and revolutions.

The Marxists, as usual, are more than happy to aid these revolutions and sacrifices the lives of tens if not hundreds of thousands of their countrymen, to establish their Marxist utopias. That every single one of these Utopias has always failed and cost the lives of millions in the process, as well as whole lost decades in economic growth, is irrelevant to the true believers, who know that this one, this time, this even will be done correctly. Simply put, there is no reasoning with such true believers.

John Monks, general secretary of the European Trades Union Confederation, which organized the events, was quoted as stating: "This is the start of the fight, not the end,"

What all of these socialists fail to answer and the cushy and spoiled workers do not dare to ask is: how do we pay for this? This of course, plays right into the hands of the Marxists.

Equally, the elites in America are setting the situation up just as well and the people are playing into it. True, there are the Tea Party movements, who have no clear agenda except to cut spending and taxes, more so taxes. If these were actual fiscal conservatives, where were they during the "good ole" days when their government under the Fascist Republicans spent in the hundreds of billions on cheap credit? Only when the Communist Democrats aintied it up a notch did they "awake". But what do they want? Cut spending? But on what? See, no one in that movement puts forth a real agenda, because if they did then problems would appear instantly.

For example: many want no more social spending, but have no problems with wars after wars, spending trillions on the invasion of sovereign nations, especially if their kids never have to serve. Others want cuts in taxes, as long as they continue to enjoy their own retirements and get cost of living upgrades, never mind that their pension system: social security, is already $40 billion in the whole.

Just like their confused European cousins, they claim: I have paid into the system, I deserve it. Well yes, but how?

Equally, most of these so called conservatives are free trade enthusiasts, because most are not in manufacturing and make cash by importing and enjoy cheap Chinese junk, never bothering to think past the price to the actual cost.

More so, even then the Europeans, who at least practice some protectionism of their industry. The Americans face a conundrum: if they cut spending now, forty million workers and their families will be out on the street, with hundreds of thousands joining them weekly, plus massive layoffs of state employees, which is already underway. This is a formula for revolution. If they continue spending, which means printing debt, they equally face an economic collapse, another formula for revolution.

Of course, with their import debt growing to record levels every month, sooner or later, regardless of what they do, they will be cut off at worst or face exploding costs at best, and the further impoverishment of the people: equally a formula for revolution.

Either way, no matter what happens, the West, already sagging under the weight of its own "prosperity" and easy, Christless, moralless living, is facing catastrophe. Anarchy, autocracy, tyranny are what is on the horizon. The only hope: a return to Christian Monarchy and stable sensible economic policy, and the crushing and ousting of the Marxists and socialists, once and for all, seems a long shot at best.