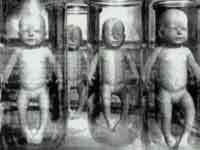 A Vatican spokesman criticized the awarding of the Nobel Prize for medicine to the British scientist Robert Edwards, the creator of the method of in vitro fertilization. Pravda.ru talked to Father Dimitry (Pershin), a teacher of bioethics, to find out whether this method was acceptable for the Orthodox and whether IVF brings happiness to infertile couples.

- Father Dimitry, based on the criteria of orthodox morality, it is OK or not to resort to IVF?

"From the viewpoint of "Basic Social Concept of the Russian Orthodox Church," the highest value is human life and soul, but the main principle is the Hippocratic covenant "do no harm," under which medical procedures should not violate the commandments.

Three moments are presented here as absolutely unacceptable. The first is the creation and destruction of spare embryos. Because the effectiveness of IVF is small, in four out of five cases, it has to be repeated. In order to avoid the risks associated with hormonal stimulation, it is often recommended to immediately create spare embryos and freeze them in the event of failure of the first implantation. But if the implantation goes well, these embryos are destined for destruction, which is unacceptable.

The second moment is carrying a child through surrogacy, which is an affront to human dignity of the hired mother and causes great injury to a child detached from her. And the third is the use of donor cells. Marriage is a mystery of the two, in which there is no place for a third party.

"Basic Social Concept" is not opposed to IVF which involves only two parents and there is no third party, no experiments with the choice of the appearance of the child, when all the embryos are implanted.
However, the main problem of IVF remains an increased likelihood of pathology, diseases of the child, genetic defects. This is not news, it is known to medicine.

There is also the problem of experimentation on human beings without their consent. It is obvious that such an experiment is not acceptable; it is basic, fundamental rules for European bioethics. And in the case of IVF life is the result of some experiment, despite the fact that consent of a child cannot be obtained in principle.

Can I assume that the desire to get a child is sufficient to warrant that its health is at stake? That is the question everyone is responsible for.

There is a similar situation, where parents who have some hereditary disease - such as hemophilia - decide to still have children, and babies are born sick. The Church does not forbid the conception in this case, but believes that it would be better to refrain from having children. In this case, it is better to adopt. In the case of IVF, since the probability of an affected child is high, this issue is also acute.

- Some people accuse Catholic and Orthodox Church of cruelty: IVF is able to give childless couples the joy of fatherhood and motherhood, while Christians prohibit it.

"IVF can be conducted under the conditions that "extra" embryos are not destroyed and donor cells are not used. This is done in Italy. They create only three embryos, the cells for them are taken only from the parents and all three embryos are implanted. No experiments on embryos, no destruction. According to the "Basic Social Concept of the Russian Orthodox Church," such an approach is acceptable as a method of overcoming infertility.

- What advice would you give to couples that are medically unable to conceive a child alone and ponder whether they should go for IVF?

"A visit to their nearest orphanage."

- These days many couples do not want to wait for conception. If pregnancy does not occur in the shortest possible time, they hasten to do IVF.

"All risks and all the problems that are caused by this artificial intervention in the reproductive functions of the body are shifted to children. Risk of having an affected child increases significantly, it will suffer. There is a question whether this is the price that we pay for wanting to have our own child."