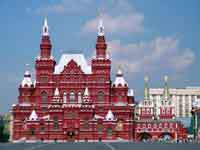 The resignation of Yuri Luzhkov as the mayor of Moscow instilled the hope in many that the city will dramatically change for the better. The Trud newspaper asked residents of seven countries who visited the capital of Russia, what kinds of conveniences Moscow could adopt from other cities.

Russian lines are considered to be the slowest in Europe. In supermarkets this problem could be solved by installing cash-robots that are eagerly used by people in London. This saves time and allows you to minimize communication with staff. The method is pretty simple. In addition, each unit is equipped with detailed instructions. You can pay for purchases both with cash and plastic.

The fans of freebies encounter elaborate protection system: in case of theft a siren goes off and doors automatically lock. Londoner Stephen Laytonbi believes that if every rude and unsmiling cashier in Moscow is replaced with a polite robot, "life in the city would be much easier and the Muscovites' mood would improve a little."

In the capital of Norway, pedestrian crossings are mostly above ground, and there are much more of them than in Moscow, said a resident of Oslo Christina Bernstad. Underground pedestrian crossings are mostly uncomfortable and dirty. "In Moscow, there are a lot of wide avenues and streets, and to cross them, you often have to look for an underground crossing. Alas, they are not that numerous, and you have walk in loops, "says Christina.

In Oslo, there is an elevator at each station and not that many stairs, so that disabled people can use public transportation. Christina also noted that Moscow drivers accelerate when they see pedestrians and park on the sidewalks and even drive on them. In Oslo, it is prohibited and punishable by hefty fines. It is fair to say that Moscow authorities also plan to toughen penalties for parking on the sidewalk.

Chicago. Beach in the downtown

For foreigners, Chicago is a large industrial city with huge skyscrapers and busy business center. But for locals it is a peaceful and liveable city with parks, bicycle paths and a great beach in the heart of the city. It is separated from the skyscrapers by a road.

Last year Moscow authorities started talking about a beach on the Moscow River, but journalists found that there is no place to pour sand there. Most formal recreation areas located at some distance from the center. However, the abnormal heat wave which lingered for two months, forced the Muscovites forget about distance. All city beaches were packed with people of all ages, even on weekdays.

Since Latvia joined the EU, tourists surged into Riga, and pretty soon it looked like a typical European city. The central squares of Riga have plenty of open-air cafes where you can have an inexpensive meal and listen to local and visiting musicians for free. In one evening you can hear several bands of different styles - from jazz to Brit-pop.

If you do not want to eat or drink, you can always just stand by and listen. In Moscow, Red Square is meant for parades, the mausoleum and expensive cafes. Most other large squares are dedicated to shopping centers, parking and other facilities.

Barcelona has a well-organized system of bike rentals. Throughout the city there are special parking booths with bicycles. To rent a bike, you need a special card, which should be bought in advance (including metro stations). The card has a deposit, and serves as a ticket: if you buy a monthly pass, it will be cheaper than a weekly or a daily rent.

A card is inserted into a machine, the data is read, and then you can take any bike from the rack. You can leave it at any other booth, also using the card. At night, bikes are transferred from one parking stand to another so in the morning every stand has equal number of bikes. Rental bikes are insured against theft because they have a distinct look.

Moscow, too, has long promised to create bicycle racks, but bike riding conditions leave much to be desired. Fans of environmentally friendly transport are faced with many challenges and have to help each other. For example, recently enthusiasts created a map of safe cycling routes. There are not that many of them. Experts believe that bikes will not be adopted in the city as an independent form of transport.

Berlin. Dedicated areas for the homeless

There are homeless in the German capital, but you can hardly see them, and they do not interfere with the residents. City officials are taking a great deal of measures to combat them: there are many places where they can shower, sleep and eat, there is room for them to rest, and even a special newspaper with news and announcements, which is distributed by the homeless.

A couple of years ago the Berlin metro leadership decided to deal with homeless people by means of classical music. At stations and on trains they played Shostakovich, Wagner and other classics. It was fun for passengers who listen to this music for a few minutes during a trip on the subway, and then get out of the train, but for the homeless people who used to sleep in the stations and cars, it was annoying. As a result, they gradually disappeared from the subway.

Moscow's homeless have become an integral part of the city center. Their permanent residence is at train stations and subways. As told by a Berliner who had visited the Leningrad train station, the police just smiled at his question as to why they are not able to get rid of so many homeless people.

Moscow homeless ignore night shelters and other "civilized" places specially created for them. Each homeless person who gets into this "hotel," gets the advantage when applying for a job, and this is precisely what they avoid. They already know where they can get free food and clothing. The army of homeless grows with the arrival of visitors who have no income.

The Japanese capital is, perhaps, the most ultra-modern metropolis. In all stores of Tokyo there are free toilets.

In Moscow, even in the most frequented places toilets are very small, and their condition, as well as price, leave much to be desired. Biotoilets installed in the city now are not even toilets in the full sense of the word. There are some free toilets in numerous Moscow shopping malls. McDonald's restaurants also serve as salvation for residents and visitors.