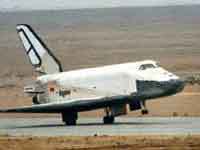 Russia's space shuttle Buran, which used to be the symbol of the nation's space power, has recently been found in Moscow. The model of the legendary shuttle is currently on display in Moscow's Gorky Park, but the one that has been found on the outskirts of the city is unfinished. It is a real shuttle that was built for space flights, the Moskovsky Komsomolets newspaper said.

Journalists found the shuttle on Lodochnaya Street, not far from the water reservoir in Khimki, a town in the Moscow region. The found construction looked like a thick short aircraft, without the tail part.

The construction of the Buran was frozen after the shuttle was nearly 50 percent ready. The works on the spacecraft stopped after the USSR collapsed and the funding of the project was suspended. In 2004, the unfinished shuttle was removed from the works of Tushinsky Machine-Building Company and taken to the Khimki water reservoir for storage.

It was not very easy to find the abandoned spacecraft. The territory, where it is located, is a storage ground for construction materials. The formerly grand spaceship looks miserable. The wings, the tail and the landing gear were found resting near the hull. All the parts are covered with a thick layer of rust and dirt.

All entrances to the Buran are sealed, but it is still possible to get inside through manufacturing openings. Inside, it seems that all the parts were made a couple of days ago. There is nothing in the cockpit, but there is equipment in the main compartment of the ship.

The fate of the Buran shuttle project proved to be unfortunate. Only one Buran shuttle had performed a space flight. It was delivered to Kazakhstan after the break up of the USSR, and then completely destroyed in 2002, when it was buried under the collapsed roof of the hangar. There was another Buran shuttle built - it was completely finished - but it never took off. Now this spaceship is a part of Baikonur space port museum. The third spacecraft was found on the outskirts of Moscow. There was another Buran shuttle made, although it was produced for training flights in the atmosphere. That shuttle was sold to Germany for 10 million euros.

Unlike Russia, the USA has been doing pretty good business on its spaceships. NASA put three remaining shuttles on sale - Discovery, Atlantis and Endeavour - for 42 million dollars each. The price includes the delivery on board Boeing-747.