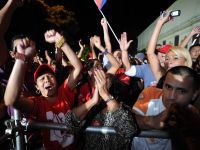 Venezuelan people won a great victory on the road to the consolidation of popular power in parliamentary elections held on Sunday (26), confirming the choice with their vote for the coalition of socialists with communists, the support base of the Chavez government.

With the irreversible results not available until 2:20 a.m. this morning, the United Socialist Party of Venezuela (PSUV) and its allies won 91 of the 165-seat National Assembly, which constitutes the majority in parliament, according to the first newsletter for the National Electoral Council (CNE ), although there are still 11 vacancies to be defined.

The candidates of the PSUV and the National Indigenous Council of Venezuela (CONIVE) also won six of the 12 deputies of the Latin American Parliament.

From the headquarters of the National Electoral Council, the governing body's president, Tibisay Lucena, said that there has been a historic participation in the legislative elections, with the support of 66.45% of the 17,575,975 people who are eligible to vote in parliamentary elections this Sunday in 36,563 electoral tables, arranged in 12,436 polling stations.

The highest electoral authorities stressed the patriotism, and the democratic and political maturity shown by the Venezuelan people.

The triumph of Bolivarian candidates represents political continuity and consolidation of the revolution and socialism led by President Hugo Chavez, as well as deepening and active participation of People's Power.

In the early hours of Sunday morning, Venezuelans came out in droves to exercise their right to vote. Despite the rain, voters remained at the polling centers, in defense of the fatherland and the continuation of the revolutionary process.

By participating in mass for the 15th election held in 11 years of the Bolivarian government, the Venezuelan people gave a strong lesson to those who have boosted non-democratic options.

The electoral process also means the ideological defeat of the more reactionary sectors of the Venezuelan right, who tried to retreat the direction of the democratic history of the country and tried to boycott the electoral process of 2005, to withdraw at the last minute, despite having received all the guarantees demanded of the electoral authorities.

Their participation in parliamentary elections in Venezuela enabled them to gain 61 seats in the new National Assembly, two for the Homeland for All Party (PPT).

With this victory, the Bolivarian Revolution confirms and consolidates its leadership as the primary political force in the country.

The leader of the Bolivarian Revolution, Hugo Chavez, congratulated the Venezuelan people through Twitter for the solid victory won in the legislative elections Sunday, which was reflected in the deepening of Bolivarian socialism and democracy.

"Dear compatriots, it was a great journey and we achieved a solid victory. It was enough to continue deepening Bolivarian socialism and democracy. We must continue strengthening the revolution! A new people's victory. Congratulations to all "- said the president in his first reaction after the announcement of results by CNE.

With information from the Bolivarian News Agency