Radical Political Slogans Find No Support with Majority of Russians

Yuri Levada's analytical center released the results of a survey designed to clarify the relations between the state and society. The results are especially significant considering public protest rallies taking place all over the country. During the protests, people often voice their radical demands. For example, the released data shows that majority of Russians, while unhappy with the crisis, do not think that the country deviates from democracy. Russians see their country as a unified centralized state with the heads of subjects of Federation appointed from Moscow. 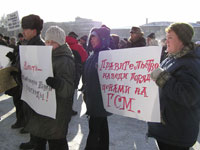 Radical Political Slogans Find No Support with Majority of Russians

Crisis affected all Russian one way or the other. As a result, people’s protest activity has increased. People have a traditional set of demands: lower taxes, raise salaries and pensions, control utility fees, preserve benefits, etc. In Kaliningrad and Vladivostok, where many make money by bringing cars from abroad, the demands include some region-specific ones, for example, lower import duties and preserve reduced transport tax.

Sometimes economic slogans are accompanied by political ones, not without the influence of certain political forces hoping to strengthen their position during the crisis. For example, demands to preserve reduced taxes for imported cars and natural privileges for workers of the social sector are accompanied by the demands to bring back governors’ elections and fire the head of the region or government. There are also some abstract demands like “return of the people to real governing of the country” or “recognition of the fault of the governing party in decreased standard of life in Russia.”

Thanks to travelling political “salespeople” who come to the regions from Moscow, one can hear the demands (allegedly from the frustrated people who protest, for example, salary non-payments) to immediately decentralize the power, start electing governors, dissolve the Ministry of Internal Affairs, etc.

However, the sociologists found that Russians are not quick on their feet and are not inclined to play political games promoted by certain parties and movements in the attempt to take advantage of the crisis. For the most part, Russians who participate in protests have specific social-economic slogans rather than abstract political ones.

For example, according to the poll conducted by Levada center, the current situation is considered a sign of the democratic development by 30% of those polled, while 46% want to see Russia as a centralized state with the regional leaders appointed from Moscow.

Sociologists believe that the data shows that the majority of Russians approve the policy of strengthening of the federal authority. These numbers also indicate that the Russian society has changed its attitude towards the issue of redistribution of power between the federal center and local governments. The number of supporters of the federal power strengthening has increased from 25% in 1998 to 46% in 2010. The number of believers in the expansion of power of local governments has decreased from 52% in 1998 to 36% in 2010.

It is worth mentioning that the poll also indicates extremely low intensity of political nature of the Russians. For instance, 85% of those polled believe that they cannot affect the government policy, while 62% “live relying on themselves only, avoiding any contact with the officials.”

It is remarkable that 77% of the respondents stated that they were not ready to actively participate in politics. Only 19% of Russians would like to take a more active stand in politics in order to change something.

In the beginning of March the center issued another, equally significant, set of data. According to the researches, 77% of Russians approve Medvedev’s actions.

Another 80% of respondents gave a positive answer when asked whether they approved Vladimir Putin as the Prime Minister, while 19% gave negative response. Despite the ongoing crisis, Russians are optimistic. For example, 54% of respondents approve the government policy.

Summarizing the numbers released by sociologists, we may conclude that, despite the growth in protests, radical political slogans promoted by certain parties and movements are not supported by the overwhelming majority of Russians. In other words, demands of total overhaul of the country’s political system are made by politicians trying to gain political scores taking advantage of socio-economic issues.