And so the document read: Joseph R. Beyrle killed in action on June 10, 1944, in France. Joseph R. Beyrle was born on August 25, 1923 in Muskegon, Michigan. His parents had received the telegram in September 1944 saying that he had been killed in action after the body of a German was found wearing his stolen dog-tags. Four months later, they received a postcard from their son, sent with the help of the Red Cross, telling them that he was a POW in Germany. Joseph Beyrle graduated from high school in 1942 with the opportunity for a scholarship to the University of Notre Dame, but enlisted in the army instead. 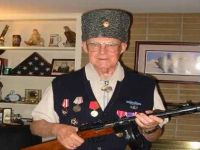 He was nicknamed Jumpin’ Joe for his activities as a paratrooper. Joe was only 20 when he was captured by the Nazis three days after parachuting into Normandy as a member of the U.S .101st Airborne Division known as the “Screaming Eagles” on D-Day in June 1944.

It is believed that he is the only American soldier to have served with both the United States Army and the Soviet Army in the Great Patriotic War. After seven months in various German prisoner-of-war camps, in which he was tortured by the Gestapo, he escaped in January 1945 on his third escape attempt. Beyrle broke out from the Stalag III-C POW camp in Alt Drewitz. He decided his best option would be to try and locate Soviet troops, the only U.S. ally fighting in the area.

He managed to run into a Red Army tank battalion. Beyrle raised his hands and shouted the only Russian words he knew — “Americansky tovarishch” or American comrade — and pleaded with the commander to let him fight with them all the way to Berlin.

In Beyrle's personal account, he says he won the trust of Soviets by using his demolition skills to blow up trees hindering the tank brigade's advance. He advanced with the unit toward Berlin, fighting alongside the Soviets and liberating the same POW camp from which he had escaped along the way. He never made it to Berlin. However, after being badly wounded in a German attack, he met Russia's famous and celebrated commander, Marshal Georgy Zhukov, at the field hospital where he was being treated.

Zhukov gave Beyrle a letter of transit to the U.S. Embassy in Moscow. There, he had to convince the Embassy to take his fingerprints before they would believe he really was who he said he was. After all, Joseph Beyrle was supposed to be dead. Finally he was allowed to make his way home to Muskegon, Michigan.

The extraordinary and heroic adventures of Joe Beyrle are now being honoured in a new exhibition called "A Hero for Two Nations." The exhibition was opened at the Stroganov Palace on Thursday by Beyrle's son, John, the current U.S. Ambassador to Russia. The exhibit also commemorates the Allied victory over fascism.

"Although people call my father a hero for two nations, my father did not consider himself to be a hero," said John Beyrle. "He always said that heroes were those who did not return from the front. He never forgot how, when he escaped from prison camp in 1945, when he was hungry and helpless, the Soviet soldiers helped him. He fought alongside them for two weeks, they saved his life in a field hospital and helped him to get to the American Embassy in Moscow."

The items on display at the exhibition include the telegram sent by the U.S. War Department to Beyrle's parents telling them he had been killed, a postcard written by Beyrle to his parents from a German prison camp, his army uniform and boots, his Soviet medals and other personal effects, as well as historic photos of the D-Day landings and some modern pieces of art inspired by Beyrle's story and created especially for the exhibition.

Decorated as a hero by both countries, the exhibition of his life will move to Moscow on May 6, three days before Victory Day celebrations on May 9. The exhibit will later travel to Veliky Novgorod and Pskov. Seminars featuring historians, veterans and their relatives, accompany the exhibit. U.S.-Russia relations experts, including Ambassador John Beyrle, will be among those gathering to discuss past cooperation between the two countries, the current state of affairs and opportunities for cooperation in the future.

Ambassador Beyrle, when attending the opening further said that his father “all his life was extremely grateful to the Russians, who saved him”. He described the exhibition as a reminder of the strong relationship between the two countries. “When you consider that the US and USSR were once bitter ideological rivals, our wartime alliance against Hitler was a remarkable triumph of pragmatism and common interest,” Mr. Beyrle said. It is hoped that the extraordinary wartime experiences of one U.S. soldier may give pause to reflect on U.S.-Russia relations in a different context.

Beyrle died at the age of 81of heart failure on December 12, 2004 while visiting Toccoa, Georgia, the site where he had trained with paratroops in 1942. He was buried with honors in Section 1, Arlington National Cemetery. The picture shows him proudly displaying his Soviet and U.S. decorations in 2004, shortly before his death.