Winter has officially arrived in Moscow, and particularly Poklonnaya Gora...and the place has been totally transformed into a magical winter wonderland. Icy towers, castles and sculptures have been built that cover an area of about 1 hectare. It took ice sculptors 500 tons of ice and snow to build it. It took deliveries by 15 wagons from northern regions of Russia to transport the ice and snow. 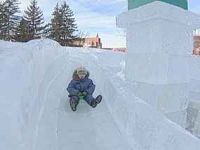 On a platform of 9,000 square metres, residences for Father Frost were built. All of them are made of nothing but ice, a mansion with the furniture.

Children will also be able to get acquainted with Slavic national traditions. From December 25th until January 14th, there will be New Year's and Christmas presentations, fairs with national celebrations and driving in a Russian "troika" with deer. In a special small ice house children will receive New Year's gifts and souvenirs.

Puppets, snowballs, “Snakes Gorynych,” laser shows, concerts three times a day and a real space town are only part of all the surprises that organizers prepared for the kids.

Sculptors have taken care that sculptures do not depend on the temperature of the air, therefore children can visit in any weather.

More than half of the available tickets will be distributed free of charge for children's homes and boarding schools, children from large families and needy families, invalid children and to social shelters. More than 60,000 families will be able to visit. The cost of the ticket with a gift will be worth 650 rubles, for adults, 300 rubles.

Tickets are also sold at ticket counters. The funds obtained from the project will be used for charitable purposes for needy children. Organizers received their funds from a fund supported by the administrative office of President of the Russian Federation, the State Duma and Government of Moscow, the main board of supporters of All-Russia party United Russia and the Russian Union of Rescuers.