Let us just try to imagine the world in 50 years. If anyone tried to write such an article about today’s world 50 years ago, in 1960, the author would most likely be ridiculed for predictions about bullet trains, cell phones and many other things that we consider common nowadays. 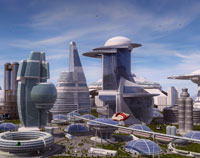 What will the world be like in 50 years? Let’s imagine what may happen in Russia in 2060.

“Another alien spaceship landed on Moscow’s Red Square yesterday. It became the 48th extraterrestrial delegation that landed on the Earth during the recent five years. The delegation arrived to establish an official diplomatic contact with planet Earth. The delegation was welcomed by a special committee of the United Government of Eurasia for Intergalactic Affairs. A crowd of nearly 200 activists of Terrestrials Against Extraterrestrials Movement was seen nearby.

The first official contact with extraterrestrial civilizations took place in December of 2055. Forty-eight alien spaceships have landed on the Earth since then. All the delegations offered their friendship to humans. A special protocol was developed for official contacts. Aliens shall notify humans of their visit to Earth one month in advance. They shall leave their main spaceship on the Moon and arrive to Earth on board a satellite spacecraft.

Air traffic jams have become particularly annoying in the middle of the 21st century. Thousands of flying cars stand still in the air above Moscow – they all wait for the column of governmental aircraft to pass.

The Moscow Zoo has recently acquired another baby mammoth. The mammoth was recovered many years ago, after the launch of the cloning of living creatures. The mammoth does not enjoy great popularity among the visitors. Many of them come to the Zoo to take a look at raptors, pterodactyls, and tyrannosauruses.

Most Russians prefer to spend their holidays in Siberia, for it has become one of Russia’s warmest regions. No one travels to Turkey, Egypt or Saudi Arabia anymore – those lifeless deserts do not raise any interest with anyone.

Russian divers finally found the legendary Tunguska Meteorite, which proved to be a large alien spaceship. The spaceship was found on the bottom of the lake. Russian scientists determined that the spaceship rammed into Earth after a serious breakdown on board. However, the spaceship does not pose any interest to modern-day researchers: Similar spacecraft was found several years ago on Mars and Jupiter’s satellites.