Russia remembered the tragic events of the autumn of 1993 on October 3-4. About 1,000 people took part in mourning ceremonies in Moscow to pay tribute to those who died during tragic events. The leadership of the Communist Party did not miss the chance to use the date for their own goals. 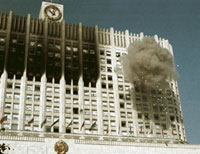 On September 21, then-President Boris Yeltsin signed an illegal decree dissolving the parliament. The Supreme Council refused to obey and continued working, triggering large-scale armed clashes, which resulted in the storm of the House of Councils (better known as Russia’s White House) and numerous victims.

Not less than 200 people were killed as they were trying to defend the parliament in the autumn of 1993. Unofficial information says that the number of victims was more than 2,000.

Leftist organizations took part in mourning events held in the center of Moscow. Gennady Zyuganov, the leader of the Communist Party, delivered a speech, in which he named those guilty of the collapse of the USSR, promised (yet again) that those guilty of the 1993 crisis would be punished and traditionally urged everyone to vote for communists.

The Communist Party traditionally plays the key role in many mourning events timed to the anniversary of the White House siege in Moscow. It may even seem that it was the party and even Mr. Zyuganov himself, who personally defended the White House and the constitution. The real state of things was different, and Mr. Zyuganov does not like to recollect those events much. It was Gennady Zyuganov, as one of the leaders of national and patriotic forces, who appeared on central TV channels on the threshold of the storm and urged the defenders to prevent bloodshed.

Mr. Zyuganov simply deserted from the battlefield having abandoned everyone who was staying in the building of the Supreme Council. Moreover, Zyuganov did his best to disorientate Yeltsin’s numerous adversaries.

Zyuganov and his followers voted for Yeltsin’s Constitution in 1993, which became their final contribution to the new state structure of the nation. The Communist Party was registered in the Ministry for Justice and obtained seats in the State Duma. Zyuganov won the title of the central oppositionist, which he still enjoys today.

Mr. Zyuganov and his team have always used the October 1993 anniversary for their pre-election goals.

After the meeting, the supporters of leftist political forces marched to the White House and laid wreaths in memory of the killed defenders. They were carrying discolored pictured of those people, who were killed in the fierce clashes in 1993.