A scandal marred the opening of Moscow’s Kurskaya metro station. Architects reconstructed the inscription praising Soviet leader Joseph Stalin. “Stalin raised us to be loyal to the people, inspired us to labor and deeds,” the inscription in the hall of the metro station says. 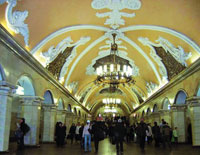 This line, penned by the late poet Sergei Mikhalkov, used to be included in the national anthem of the USSR. Sergei Mikhalkov died the day when the administration of the Moscow Metro was trying to explain the reasons which led to the reconstruction of the inscription.

The inscription, which many Muscovites saw on an archway of the hall, has an interesting story. The above-mentioned line was removed from the hall of the metro station during the 1950s within the scope of the struggle against the cult of Stalin’s personality. Sergei Mikhalkov edited the text of the Soviet anthem and replaced Stalin with Lenin: “The sun of freedom was shining through storms, and Lenin the Great illuminated our way. He rose people for the rightful cause and inspired us to labor and deeds,” the new editing of the anthem said in 1977.

It goes without saying that communists supported the initiative of the Moscow Metro. They said that it was an act “to preserve the historical legacy in a true sense of the word.”

Several political parties sent official letters to Moscow Mayor Yuri Luzhkov and condemned the reconstruction of the inscription at the station in the center of Moscow, Interfax reports.

The redesigned hall of the Kurskaya-Koltsevaya (Kurskaya-Ring) Station opened after reconstruction on August 25, 2009. Dmitry Gaiev, the Director of the Moscow Metro, previously stated that the Kurskaya Station was a monument of architecture that was supposed to be reconstructed in its original appearance. However, they did not reconstruct Stalin’s statue which used to be erected at the station as well.

Also read: Getting around town on the amazing Moscow retro