Russian President Dmitry Medvedev is deeply concerned about the attempts to draw parallels in the history of the Soviet Union and fascist Germany. 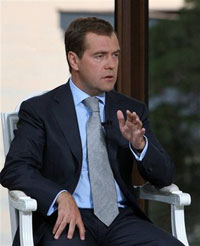 “The Parliamentary Assembly of the OSCE has literally made fascist Germany and the Soviet Union equally responsible for World War Two. But this is, I beg your pardon, shall be considered as cynical lies,” Medvedev said in his recent interview on a central Russian TV channel.

“One may treat the Soviet Union and its leaders differently. But the question is who started the war, who killed people and who saved people, millions of lives, and who in the long run saved Europe,” Medvedev said.

Medvedev referred to the events of WWII as “the greatest tragedy of the 20th century. “This is the tragedy that took about 70 million lives, and this number has not been ascertained yet,” he said.

“The question is how these events are interpreted in the world. Unfortunately, one may witness clear regression here. About 20 or 30 years ago, during the existence of so-called opposing blocs - I mean the Western and the Eastern worlds, the Warsaw Pact and NATO – everyone was certain that fascism had received a proper estimation in the world. Everyone shared the same opinion about it despite the difference in the ideological approaches,” Medvedev said.

“Now it seems that we all share common values, we do not argue about the essence of vital values, how economies should be built and on which grounds states should be built. However, amazing things may occur at times. The Baltic States and Ukraine declare former Nazi associates their national heroes. Everyone else realizes what really happened, but they just turn a blind eye on that not to ruin relations,” the president said.

He also exemplified his point of view with the recent situation at the Parliamentary Assembly of the OSCE, which made the USSR and Nazi Germany equally responsible for the Second World War.

“We all must treat our history carefully, especially when it comes to obvious issues which received clear estimations in the whole world. One may not destroy the institutions that were created as a result of such tragic events. We may not cross that out to please the states which currently go through the stage of development and form their national identities. We must think of the future instead,” Medvedev stressed out.

“This is one of the most important lessons which comes from the greatest catastrophe of the 20th century, the Second world War,” he said.

The resolution passed by the Parliament Assembly of the OSCE particularly says that the countries of Europe suffered from two major totalitarian regimes during the 20th century – Nazism and Stalinism – that were characterized with genocide, violation of human rights and freedoms, with war crimes and crimes against humanity. Russia’s Parliament, the State Duma, and the Federation Council harshly condemned the resolution.