The legend about the so-called White Guard Gold of Russia’s Admiral Kolchak, ataman Semyonov, Baron Ungern and other prominent historical persoans is still alive. Legend has it that a whole carriage of Kolchak’s gold sank in Baikal Lake at the end of 1919. Specialists continue searching for the mysterious treasure: Russia ’s renowned Mir submersibles were involved in one of the recent scientific missions to find the treasure. 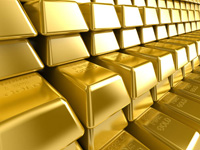 Pavel Novikov, an expert on the history of Russia’s White Movement, said that Admiral Kolchak used a part of those gold reserves to order hundreds of locomotives from the United States.

“Bolsheviks seized those locomotives from the Whites in 1919 – from 200 to 300 locomotive engines. A similar story occurred to French Renault tanks, which the Red Army suddenly obtained in 1920 in its battles against Ataman Semyonov. I believe that small batches of gold can be found somewhere in the Siberian woods – the Whites might have left them there during the retreat of the White Army, the historian said.

The story began on August 6, 1918, when a detachment of Colonel Kappel seized Kazan – the city where most of Russia ’s golden reserves was stored. The treasures, which the colonel seized, were evaluated at 750 million golden rubles – coins made of precious metals, bars of gold and platinum and many other valuable things.

The gold reserve was moved to Omsk in November of 1918. Kolchak’s government was controlling the reserve there, although the admiral did not touch Russia’s national endowment until the end of May, 1919. However, the serious condition on the front made him change his mind. More than a third of the reserve had been spent by the time of his evacuation from Omsk on October 31, 1919.

Kolchak’s “golden train” arrived in Nizhneudinsk on December 27, 1919, where it was delivered to Czechoslovakian legionaries. Bolsheviks eventually obtained 409 million golden rubles – 323 tons of gold. However, it is not clear, how much they exactly received from credit notes, silver and platinum. That was the time when legends about the loss of the legionaries’ gold emerged. The Whites, the Reds, historian and journalists – all of them reproached the Czechoslovakian legionaries of theft. Two of the most common versions say that the gold had been stolen either during the transportation of the precious metal from Kazan to Omsk , or during an attack on the train in Nizhneudinsk. Up to 11 million golden rubles disappeared at that time.

There is not even a document to prove the fact that the Czech and Slovak legionaries stole the Russian gold. However, the rate of the Czechoslovakian crown skyrocketed soon afterwards – the currency was the hardest one in Europe before the German occupation of the country in 1939. However, this fact is not good enough to be the reason to any accusations. The White Czechs exported many of Russian valuables in 1920 indeed. They seized a lot during their battles with Bolsheviks and obtained much as a result of commercial manipulations.

Russia’s gold reserves lost 235.6 million golden rubles during the time when Admiral Kolchak was managing it. Ataman Semyonov attacked the train with Kolchak’s gold – 42 million golden rubles - in September 1919. About 29 million of that gold was spent on the needs of his army. The remaining 13 million rubles were placed in Japanese banks.

The further fate of that gold is unclear. About 128 million golden rubles, or 100 tons of gold, were transferred to foreign banks in the USA, France, England, Japan and China. Kolchak originally planned to use those reserves for purchasing foreign arms. His government collapsed soon, and financial manipulations became impossible. No one knows what happened to that gold, which was sent abroad.

There is a curious document in the State Archives of the Russian Federation, which sheds some light on the fate of the nation’s gold reserves. This is a report from the chief of Kolchak’s counterintelligence service dated from August 14, 1919. The report is about the gold which stuck in France. The gold was supposed to be used to purchase airplanes for the White Army, but the French arrested the money for the debts of Russia ’s Tsarist and Interim governments.

It is worthy of note that Russia and France refused from financial claims to each other in accordance with the treaty signed in 1997. The value of the matter for Moscow made up $400 million.