Peter I of Russia, or Peter the Great, one of the most recognizable personas of Russia’s history, was born on June 9, 1672, in the Moscow Kremlin. Chronicles say that Peter was born in the Teremnoy Palace of the Kremlin. The baby was quite big: 48.9 cm long and 13.3 cm wide. 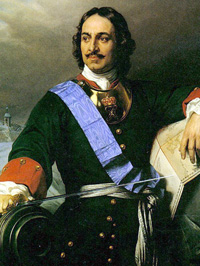 Peter was the 12th child of the czar, but his first child from his second wife, Natalia Naryshkina. The czar, Aleksey Mikhailovich, died four years after Peter’s birth. His cousin, godfather and Russia’s new czar, Fyodor Alekseyevich, became his guardian.

When a child, Peter astonished people with his beauty, activity and strength. When he grew up, he became taller than everyone else – he was 2.7 meters tall. Historian Klyuchevsky wrote that Peter was a very strong man. He could roll a silver plate into a pipe.

The czar was fluent in German from his childhood. He later studied the Dutch, the French and the English languages. He was a very intelligent person, although sophisticated foreign aristocrats feared his rude manners.

The would-be Russian emperor was given home education under the surveillance of his uncle, Nikita Zotov. The latter complained that the 11-year-old czarevich (the prince) was not good at reading, writing, history and geography. The future czar was thoroughly involved in military games on the outskirts of Moscow. Peter’s regiments of boy-soldiers later became the core of the Russian regular army. Peter himself was just a drummer in his toy army.

When Peter ascended to the throne as the czar, he began to explore Europe. He studied the experience of European ship-building, military schooling and other sciences. He personally worked as a carpenter at the Ost-Indian Company, visited the British Parliament, the Oxford University, the Royal Observatory in Greenwich and the London Mint were he was welcomed by Sir Isaac Newton himself.

The childish and silly hobbies of the Russian czar led to major transformations in Russia’s foreign politics. Peter the Great, no matter how contradictory his persona might be, managed to change the image of Russia for many centuries.

In the winter of 1723, Peter, whose overall health was never robust, began having problems with his urinary tract and bladder. In the summer of 1724 a team of doctors performed the necessary surgery releasing upwards of four pounds of blocked urine. Peter remained bedridden till late autumn. Then in the first week of October, restless and certain he was cured, Peter began a lengthy inspection tour of various projects. According to legend, it was in November, while at Lakhta along the Finnish Gulf to inspect some ironworks, that Peter saw a group of soldiers drowning not far from shore and, wading out into near-waist deep water, came to their rescue.

This icy water rescue is said to have exacerbated Peter's bladder problems and caused his death on 8 February 1725 at age 52. The story, however, has been viewed with skepticism by some historians, pointing out that the German chronicler Jacob von Stählin is the only source for the story, and it seems unlikely that no one else would have documented such an act of heroism. This, plus the interval of time between these actions and Peter's death seems to preclude any direct link. However, the story may still, in part, contain some grain of truth