Lenin’s mummy may be transported from the Mausoleum on the Red Square to Minsk, the capital of Belarus, in the near future. The government of Belarus supposes that Lenin still remains a symbol of their nation. Officials say that they would be ready to accept his body in Minsk honorably if Moscow begins to implement the plan to finally bury the deceased leader of the world’s working class. A special monument resembling Lenin’s Tomb is likely to be built for him in the Belarusian capital. 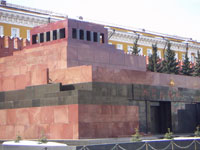 Sources from the team of Belarusian President Alexander Lukashenko maintain that this issue has been repeatedly discussed at the highest level. Lukashenko believes that burying Lenin is a crime. The head of state is sure that Lenin’s presence in Minsk will unite the Belarusian nation before outside enemies. All sociological surveys confirm that there is strong nostalgia for the Soviet past in Belarus.

The debate about burying Lenin’s body flared up again on the eve of his birth anniversary this year. Several political parties and movements including the Orthodox Church and the Liberal Democratic Party of Russia with its head Vladimir Zhirinovsky demanded Lenin be carried away from the Red Square and transported to Ulyanovsk - his home town.

The Russian Minister for Culture Alexander Avdeev stated that Lenin’s body was not a cultural value for Russia, but its burying was a political question.