A new record in the exploration of the Arctic was set on Sunday (April 26) when wheeled cars reached the geographical North Pole. No one has ever been able to do it before. 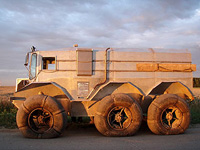 Two Russian-made Yemelya experimental vehicles have traveled over 1,100 kilometers across drift ice of the Arctic and reached the North Pole.

“This victory is the result of two years of our training to have the vehicles ready for the severe Arctic conditions. We also did the profound analysis of previous Russian missions to the north,” the leader of the ice mission Vasily Yelagin told Itar-Tass.

“No one else works in this direction – to explore drift ice on wheeled cars. We have proved our advantage yet again,” the specialist added.

A Yemelya car is a rescue in the conditions of the snowy north. Unlike conventional tracked cross-country vehicles, they do not leave any traces on ice, they are very comfortable and fuel efficient.

The team is now heading to the Russian ice air base, which is located 80 kilometers far from the North Pole. The vehicles and their drivers will return to the mainland from there.