The launch of the Soyuz-1 spaceship, which took place on April 23, 1967, had a tragic ending for the first time in the history of manned space missions. Cosmonaut Vladimir Komarov died as a result of the tragic landing. Legendary cosmonaut Yuri Gagarin was Komarov’s stand-in in the historic flight. First man in space was aware of the drawbacks of the spaceship and attempted to interfere to save his colleague. 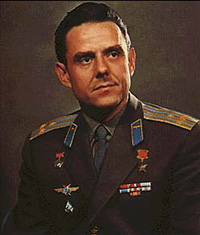 Vladimir Komarov was an experienced cosmonaut: his first flight took place on October 12-13, 1964, together with cosmonauts Konstantin Feoktistov and Boris Yegorov on board the Voskhod spaceship – the world’s first many-seated spaceship. There was a pilot, an engineer and a doctor in the crew. The crew had no spacesuits during the landing and were conducting the first test of the soft landing system.

The spaceship blasted off successfully. The flight lasted for 24 hours and 17 minutes: the ship orbited Earth 16 times. Komarov was awarded the title of the Hero of the Soviet Union and was decorated with the Lenin Order and the Golden Star Medal. He soon became the third Class Cosmonaut and subsequently became an instructor with a group of cosmonauts, the training programs of whom included a manned mission to the Moon.

Komarov’s second tragic flight became a part of the lunar race between the USSR and the USA. A series of misfortunes had occurred prior to the launch of the Soyuz-1 spaceship. Engineers found about 200 constructive defects before the flight, but the Soviet government did not agree to push the flight back against the background of the nation’s space rivalry with the United States.

Yuri Gagarin, the planet’s first cosmonaut, an international hero, was Komarov’s stand-in in the tragic flight. Gagarin was obviously aware of the technical flaws and of the pressure from the country’s political administration. He tried to use his reputation to stand up against that pressure. Gagarin said that he could replace Komarov in the flight in a hope that top officials would pay more attention to technical details and eventually decide to delay the launch of the spaceship.

Gagarin’s request was denied. Soyuz-1 blasted off with Komarov on board on April 23, 1967. The launch was normal, but one of the panels of the solar battery did not unfold after the spacecraft entered Earth’s orbit. The short-wave communication equipment went out of order soon afterwards.

There was no point to continue the flight. It was decided to perform an emergency landing on April 24. The cosmonaut died after the parachute of the capsule did not open: the landing craft rammed into the ground at full speed.

The tragedy took place not far from the village of Karasuk in the Orenburg region of Russia. The urn of Komarov’s ashes was placed inside the Kremlin wall in Moscow.

Georgy Beregovoy continued the Soviet lunar program on board the Soyuz-3 spacecraft. His flight took place on October 26-30, 1968. The spaceship performed a series of maneuvers on the orbit and approached the Soyuz-2 ship twice.

The docking of two manned spaceships (Soyuz-4 and Soyuz-5) took place in January 1969. Cosmonauts V. Shatalov, B. Volynov, A. Yeliseyev and E. Khrunov moved between the two ships via open space.

Vladimir Komarov became the first hero of the space race between the two superpowers. The race ended after Neil Armstrong, Michael Collins and Edwin Aldrin landed on the Moon.