Every other Russian dreams to become cosmonaut

Every other Russian dreams about flying into space, sociologists of SuperJob.ru research center said as a result of their recent opinion poll. 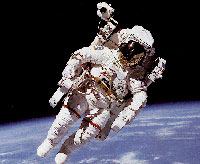 Every other Russian dreams to become cosmonaut

“If there was such an opportunity, I would not think twice about it.” “This is the best that can happen to a human being in a lifetime!” – many respondents said during the poll.

About 58% of the polled men said that a flight into space would be the greatest romance of their life. A space journey seems to be an attractive endeavor for 42 percent of the polled women.

Specialists pointed out the fact that the idea of making a space flight was more popular with unmarried individuals – 55 percent vs. 45$ of family men and women.

About 43 percent of the polled Russians said that they did not want to make a space flight because they were scared of flying and were not certain of their health condition. Others said that they did not have any interest in space. “There is nothing to do there. I like it more here on Earth – there are so many places on the planet where I have not been,” some of the respondents said.