The struggle for the title “Russia’s Third Capital” (following Moscow and St. Petersburg) between the governments of Kazan and Nizhni Novgorod is now over. Kazan, the capital of the Republic of Tatarstan, has won. The authorities of the city have already registered trademarks “Russia’s Third Capital” and “ Russia’s third City” at the Russian Patent Agency. 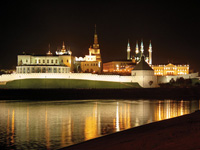 Kazan started using “Russia’s Third Capital” slogan in March 2007 at international exhibitions in France and Germany. The use of the slogan triggered a conflict between the authorities of Kazan and Nizhni Novgorod, whose officials claimed that Kazan had illegally appropriated the high status.

The city of Nizhni Novgorod claims its right for the title too. The city is widely known in Russia as one of the oldest Russian cities. It used to be the capital of a Novgorod-Suzdal principality during the second half of the 14th century. The government of Tatarstan said that Vladimir Putin referred to Kazan as the third capital of Russia during the 100th anniversary of the city in 2005.

Kazan is one of the largest cities of Russia with a million-strong population (52 percent of Tatars and 43 percent of Russians). It is a major industrial, commercial and cultural center of the country.

In 1552, the city was conquered by Russia under Ivan the Terrible and the majority of the population was massacred. During the governorship of Alexander Gorbatyi-Shuisky, most of the khanates's Tatar residents were killed, repressed, or forcibly Christianized. Mosques and palaces were ruined. The surviving Tatar population was moved to a place 50 km away from the city and this place was forcibly settled by Russian farmers and soldiers. Tatars in the Russian service were settled in the Tatar Bistäse settlement near the city's wall. Later Tatar merchants and handicraft masters also settled there.

Kazan was largely destroyed as a result of several great fires. After one of them in 1579, the icon Our Lady of Kazan was discovered in the city. During the Time of Troubles in Russia the independence of the Kazan Khanate was restored with the help of the Russian population, but this independence was suppressed by Kuzma Minin in 1612. The history of that period requires further research.

The city has a beautiful citadel, which was declared the World Heritage Site in 2000. Major monuments in the kremlin are the 5-domed 6-columned Annunciation Cathedral (1561-62) and the mysterious leaning Soyembika Tower, named after the last queen of Kazan and regarded as the city's most conspicuous landmark.

Also of interest are the towers and walls, erected in the 16th and 17th centuries but later reconstructed; the Qol-Şarif mosque, which is already rebuilt inside the citadel; remains of the Saviour Monastery (its splendid 16th-century cathedral having been demolished by the Bolsheviks) with the Spasskaya Tower; and the Governor's House (1843-53), designed by Konstantin Thon, now the Palace of the President of Tatarstan.