Mikhail Gorbachev, the first and the only President of the USSR, turns 78 on March 2, 2009. 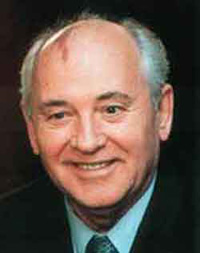 Gorbachev was born in Russia’s Stavropol region, in the settlement of Privolnoye, ten years before the Great Patriotic War began. In 1955, he graduated from the Department of Law of the Moscow State University. When a student, he met Raisa Titarenko – the couple got married in their dormitory. Gorbachev joined the Communist Party of the Soviet Union during his student years too.

He returned to the Stavropol region after studies and served at several official positions at the local Komsomol Committee. In 1966, he became the first secretary of Stavropol’s party organization, and became elected to the Central Committee of the USSR’s Communist Party in 1971. Gorbachev became the leader of the committee, its First Secretary, seven years later. At age 54, in March of 1985, he became the committee’s General Secretary.

The Soviet administration launched the largest anti-alcohol campaign in 1985. Scenes of alcohol drinking would be cut from films. That was the time when action movie “Lemonade Joe” was showing at Soviet movie theaters. The nickname stuck to Gorbachev along with another by-name – “The Mineral Secretary.”

Gorbachev launched the era of perestroika in 1986, although the goal of the endeavor – the economic rise of the nation – was never achieved. Quite on the contrary, the reduction of oil prices, the imbalance between the branches of industry and a number of other factors have resulted in the acute shortage of consumer goods, the decreasing birth rate and the record growth of the national foreign debt.

In 1988, the Communist Party approved the law about cooperation, which gave people an opportunity to deal with individual labor activities.

Gorbachev introduced glasnost – freedom of speech – in 1988. His initiative gave the people a greater freedom of speech. This was a radical change, as control of speech and suppression of government criticism had previously been a central part of the Soviet system. The press became far less controlled, and thousands of political prisoners and many dissidents were released. Gorbachev's goal in undertaking glasnost was to pressure conservatives within the CPSU who opposed his policies of economic restructuring, and he also hoped that through different ranges of openness, debate and participation, the Soviet people would support his reform initiatives.

In 1986, the USSR passed the Nuclear Disarmament Program and urged world’s leading nations to join the moratorium on nuclear tests. Gorbachev met Ronald Reagan in the fall of 1986. The Soviet leader asked his US counterpart to eliminate all medium-range missiles, although the United States lagged behind the USSR in terms of the nuclear arsenal during those years. Gorbachev was awarded the Nobel Peace Prize in 1990 for his role in the international peace process.

Gorbachev was elected the President of the USSR by the Congress of People's Deputies and chose a Presidential Council of 15 politicians. Gorbachev was essentially creating his own political support base independent of CPSU conservatives and radical reformers. He stepped down as the head of state at the end of 1990.

He founded the International Foundation for Socio-Economic and Political Studies (The Gorbachev Foundation) in the beginning of 1992, which he chairs to the present day. He later founded Green Cross International, with which he was one of three major sponsors of the Earth Charter. He also became a member of the Club of Rome and the Club of Madrid.