The stereotypes of Russia’s traditional image in the world have undergone significant changes within 20 years. Years ago, the perception of Russia in foreign countries was mostly formed by foreigners visiting Russia as tourists. Nowadays, the perception of Russia’s image strongly depends on Russian IT specialists running their businesses on the Internet all over the world, SecurityLab website reports with reference to an article published on The Ecommerce Journal. 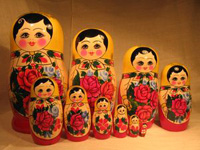 The traditional attributes of Russia and its nationals – vodka, severe winter cold, nesting dolls or matryoshkas, fur hats and fur coats – have now become history, the author of the article wrote. Carders, phishers, hackers, cheap scripts, shady schemes, currency exchangers and WebMoney – these are things that Russia is closely associated with now, the author concludes after making obviously a very weak attempt to look into the cobwebs of the mysterious Russian character.

According to the above-mentioned journal, Russians love using ICQ, they do not like having phone conversations and value beauty and fast income in businesses. Foreigners mostly think of Russians as the people who do not like documents and formalities claiming that paperwork can only be an obstacle in business relations. A typical Russian, The Ecommerce Journal wrote, prefers the only program – ICQ – to phone talks, MSN, Yahoo, QQ or Skype and uses gmail accounts.

As a matter of fact, the article clearly shows that the situation has not changed at all. Foreigners do not understand the Russian culture just like Russians do not understand foreign cultures. Typical foreign writers, like the writer of the above-mentioned article, tend to portray Russia as a weird nation, but many “typical” Russians would strongly oppose to it. It is about time foreigners should understand that Russia is just different. Being different does not imply being worse. Does anyone think of China as a weird nation? If all the Chinese have their own China-specific email servers, does it make them look strange in foreigners’ eyes?

Below you can read what a Russian blogger, Svetlana Gladkova, has to say in response to the above-mentioned article. The full post originally appears on her blog, Profy.com.

“Basically the author of the article replaces one set of stereotypes - “Vodka, frost, bears, matryoshkas, hats with ear-flaps” - with a new set - “Carders, phishers, hackers, cheap scripts, shady schemes, exchangers, WebMoney”. And unfortunately I can’t help but feel it’s not quite fair to replace innocent things like matryoshkas and ear-flaps with illegal phishing and hacking. True, many people in Russia do have unique skills in IT and apply them with enough talent to get noticed, and as with any skills these can be used for good or for bad and not all Russian coders apply such skills to create malware - some of them come up with impressive projects of their own while others work in well-known internet and software giants and it is pretty difficult to imagine exactly how many Russian developers work behind the scenes in companies like Google or Microsoft.

“Really, I don’t know why it was necessary to come up with something that is supposed to make Russians happy - admitting our unique IT skills and our noble nature and ancient traditions - but refusing us the right to be a diverse nation with both good developers and hackers as well as entrepreneurs that don’t differ from entrepreneurs doing business in any other country - with the only exception being that we’ve been through a financial turmoil of this or that kind so many times that we are now creative enough to survive any new crisis the world economy can make us face.

“Unfortunately after reading the description the author provides for a Russian partner in an internet business, I have a feeling that he only had one partner from Russia and simply does not have enough experience to judge us. No, we don’t really expect profits of 50% minimum or we won’t even consider working with you. And yes, we do use ICQ for communications with our local friends as ICQ is traditionally the most popular IM protocol in the former Soviet Union countries but we use Skype, Google Talk and whatever else you may need if we do business online - we are very early adopters in everything, communications means included.”

The cultural gap between Russia and the West will never diminish, which is absolutely a normal phenomenon for these two absolutely different worlds. Matryoshkas and fur hats still exist and they have not been replaced with anything else – they are still available in all gift shops in Moscow and other cities. Most people do not wear hats with ear-flaps in Moscow these days, for these hats are too warm for what Moscow winters have recently become, but if you travel away from Moscow to other regions of the country, where winters are colder, you will see those hats practically everywhere. The only way to get a true picture of a foreign country is to visit that country and meet its people. Otherwise, one may only have a distorted picture of the world.