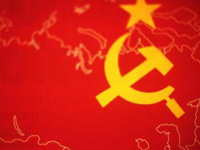 (Rome) When Italian Communist leader Enrico Berlinguer (1922-1984) spoke from the platform adorned in red banners raised on Piazza San Giovanni in Rome, red flags bearing the hammer and sickle waved over the great cathedral square. The entire event—place, objects, music, chants, language—was emblematic of the aspirations of Italy’s working class. Whatever Europe’s beloved Communist leader said was greeted with agitation of flags and from loudspeakers bursts of the music of Bandiera Rossa (Red Flag). Italian Communist rallies are festive affairs, celebrated according to trusted rituals and symbols and a million voices singing the Internationale or Bandiera Rossa or Bella Ciao.

Those were symbols for those with hopes for revolution. Now, today, with increasing frequency we hear the word revolution in America, too. The revolution in the making defined as the Third American Revolution—after those of 1776 and 1865. The atmosphere in America resembles the mood that swept across Europe in the 1970s and 80s. Movements of rebellion and revolution are rich in slogans and rituals and symbols more unifying than speeches: the red flags and the hammer and sickle meant resistance; the names Red Brigades and Red Army Fraction and Direct Action in Europe meant revolt and revolution.

Also Fascism was strong in symbols. Mussolini’s mentor, the poet Gabriele D’Annunzio, once attributed Fascism’s success to its symbols, to its songs, like Giovinezza, that Italians of that generation recall. There is also a story of Hitler’s arrival at an Italian rail station, he frumpy in a crumpled raincoat, met by Italian Fascists in their pompous uniforms following Italo-Fascist rituals. Hitler was so impressed by the symbolism that he decided on the mythological representation of Nazism, the uniforms, the nocturnal parades, the symbolic use of torches and the herald-like banners on the Königsplatz in Munich.

The red flag and hammer and sickle

Since ancient Rome’s slaves revolted revolutionary symbols through the centuries have been similar. For two months in 1871 the red flag waved over Paris, the symbol of the seizing of power by Socialists and Anarchists. The Paris Commune and its bloody end made it an important link in the chain of events marking the development of workers’ resistance to Power. Their red flag stood for revolt, for blood shed. It symbolized the aspirations of the proletariat for revolution against oppression and exploitation, culminating in the Russian Revolution.

Practically every human being is familiar with the hammer and the sickle and the red star, the most famous symbols of Communism and Communist parties. The symbiosis of the sickle and the hammer adorning red flags illustrate worker unity. Not surprisingly, some members of the reactionary European Parliament have proposed a ban on the hammer and sickle symbol. The red symbol is a scarecrow used by Capitalism to maintain power. The invincible “Red” Army poised to sweep over West Europe at the end of World War II was the bugbear used by the USA to create the Cold War and military instruments like NATO now in Afghanistan “to fight terrorism.”

The Italian writer and semiologist, Umberto Eco, defines revolution as “the sum total of a long series of revisions.” Eco said that Michel Foucault had elaborated the most convincing notion of Power (against which revolutions explode) in circulation: “Power is not only repression and interdiction but it is also incitement to speak. Power is not one single power. It is not massive. Power is multiple and ubiquitous. It is a network of consensuses that depart from below. Power is a plurality. Power is the multiplicity of relationships of strength.” In that sense, the Paris Commune was not a revolution; at the most it was the tail end, the last throes of the French Revolution a century earlier.

The aspirations of the European terrorist organizations last century pale in comparison to revolution; though ambitious, idealistic, highly ideological, and based on the two pillars of an intellectual vanguard and workers, they were limited in scope and realism. Their only symbols were the pistol, the red flag and the five-pointed star. The Red Brigades chief, Alberto Franceschini, told me that they had truly believed the modern state had a heart and that they could strike it and turn history around.

Also the original international character of the Russian Revolution of 1917 was fundamental to its success: Workers of the world unite was its slogan and the hammer and sickle the symbol. Lenin believed the Revolution was doomed to defeat by capitalistcounter-revolution unless it generated proletarian socialist revolutions in West Europe. International revolution was the key to victory. Therefore its internationalist slogans.

We have the example of the Cuban Revolution today. Though it overthrew the corrupt US-backed dictatorship of Fulgencio Batista, Cuba faced US sanctions and an entire Latin America dominated by US capitalism. The Cuban Revolution brought social progress to the people, universal health care and education and exported doctors and medical care to several African countries. Still today Argentineans and other Latin Americans go to Cuba for serious medical care. Cuba remains as a spiritual guide for the Left in Latin America. Cuba’s problems lie in its isolation. Cubans suffer because of the US embargo. As Lenin and Trotsky insisted, Socialist revolution in one country is not possible. Cuba could rely only on the Soviet Union. Since the collapse of the USSR, Cuba’s economic sufferings have increased. And now, with Castro’s retirement, the capitalist world is ready to pounce.

However, the emergence of the diverse forms of Socialism in Latin America has created a new objective situation. Cuba is no longer in total isolation. Venezuela , Bolivia , Ecuador and Nicaragua have elected pro-Cuban leftwing governments; the Mexican electorate has swung Left; Brazil , Argentina and Chile are now friendly states. ALBA (Bolivarian Alternative for the Americas ), the Venezuelan creation to oppose the IMB, The World Bank and US neo-liberalism in general. The figures of the freedom fighters Martí and Bolívar and Che Guevara are symbols of liberation from US hegemony, in the same way the Cuban Revolution itself is a symbol of Latin American revolution. For this reason the capitalist world is dedicated to crushing the Cuban Revolution.

Nicolas Berdyaev (b. 1874 in Kiev, d. 1948 in Paris) in his The Origin of Russian Communism, written in 1937 and published in English in 1960 as an Ann Arbor paperback by The University of Michigan Press, distinguishes between the Russian “Bolshevik” Revolution and Communism in the West, which he defines as a phenomenon of another sort. Berdyaev recalls the legend that sprang up in revolutionary Russia about Bolshevism and Communism: in popular thought Bolshevism was a revolution of the Russian masses. Communism was foreign. It was imposed upon the people’s revolution by a despotic organization. In the end, after years of chaos, the unruly masses were organized in the elemental force of the revolution by the “Communist” idea. Anarchy was checked and absorbed by the new state. The state symbolized by Orthodoxy and the double-headed eagle was distant from the Russian people, though their Tsar was a godlike “Little Father.” Berdyaev, philosopher, religious existentialist thinker and prolific writer, who left Russia for West Europe in 1922, wrote that Russian Communism was the transformation of the Russian messianic idea of international brotherhood, and a reflection of the Russian religious mind. History however has demonstrated that the Russian idea of universal brotherhood or that workers of the world will unite are utopian.

Though Yugoslav Communist Milovan Djilas’ analysis of the national paths to Communism was penetrating, I today do not accept his conclusion that Communism is unsuitable for contemporary life. Moreover, I believe Djilas himself would revise many of his conclusions today in view of American imperialism. We need to take another look at the slogan, Workers of the world, unite!

Pictures of Marx, Lenin and Mao Zedong remain as emblems of the philosophy of Communism. Today, as a result of the US encirclement of “post-Communist” Russia, portraits of Lenin mushroom on Red Square while parades of missiles pass before surprised crowds, many of whom are too young to have seen the First of May parades of the Soviet era. In view of US pressure on Russia, I would bet that this May 1 parades will be bigger each year. Meanwhile, people of good faith hope for a revival of Russia in order to control rampaging and loony Washington.

Gaither Stewart, Senior Contributing Editor for Cyrano’s Journal/tantmieux, is a novelist and journalist based in Italy . His stories, essays and dispatches are read widely throughout the Internet on many leading venues. His collections of fiction, Icy Current Compulsive Course, To Be A Stranger and Once In Berlin are published by Wind River Press. (www.windriverpress.com ). His recent novel, Asheville, is published by Wastelandrunes, (www.wastelandrunes.com).

Lavrov at UN General Assembly: No more exceptionalism and unipolar world Andrey Mihayloff
World
Kremlin: Russia still ready for talks with Ukraine, but conditions have changed
Hotspots and Incidents
Anti-terrorist operation will give the upper hand to the Russian Army