The aircraft construction industry of the USSR was working on an amazing project during the years preceding World War Two. Konstantin Kalinin, an outstanding aircraft designer of those times, was leading the project to build a gigantic flying machine, which was known as the K-7 heavy experimental aircraft. 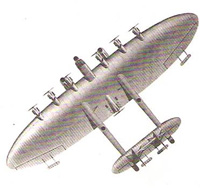 Kalinin’s design bureau was working on the plane at the end of the 1930s. K-7 became the embodiment of revolutionary ideas of that time. For example, for the first time in history the plane was outfitted with a control wheel booster. This option was widely used in the aircraft-building industry afterwards. Kalinin also decided to use chrome molybdenum steel pipes for the carcass of the liner, which was also a novelty in the Soviet Union .

The first tests of the aircraft began in 1933, but the government ordered to scrap them soon afterwards. Kalinin’s opponents convinced the Soviet leadership that there was no sense in spending too much money on the flying giant. Kalinin’s ideas, which were never materialized in K-7, were later used in the development of heavy aircraft.

K-7 was originally designed as a three-engine passenger plane to transport 22 passengers and luggage. The design bureau subsequently rejected the idea and the project began to develop as the construction of a transcontinental aircraft. Kalinin wanted to make the plane look like a huge wing, which would be the perfect aircraft, as he thought. Therefore, the constructor was working on the project on all-in-one-wing principle.

K-7 was virtually a giant ellipsoid thick profile wing with a span of 53 meters. The wing was outfitted with tail booms carrying horizontal and vertical stabilizers. The cockpit was protruding along the center line of the plane. Other members of the crew were situated in other departments of the plane and communicated with each other through the internal communication system. The chassis of the plane consisted of two widely spaced gear trucks.

The aircraft was designed as a multi-purpose civil and military plane. One of its passenger variants envisaged the transportation of 128 passengers at a distance of up to 5,000 kilometers. A luxury version of the plane stipulated the installment of double-deck passenger compartments accommodating eight passengers each. Mechanics could approach the working engines of the plane owing to the unique construction of the aircraft.

As for the military version of the flying wing, K-7 was supposed to carry up to 12 powerful air guns. The weight of bombs depended on the flight range: from 9.9 to 16.6 tons.

All the works on the giant plane were stopped after one of the tests ended with a crash of the aircraft. The planes were put on standby, although one of the planes was 50 percent ready.