Hundreds of people mysteriously disappear in Russia every day

Several hundreds of people vanish in Russia every day. The number of those who disappeared without a trace during the recent several years has doubled and reached 120,000 people. Out-of-town visitors, entrepreneurs and lonely proprietors make the largest risk group at this point. 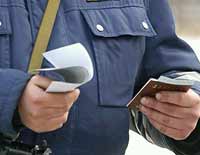 Hundreds of people mysteriously disappear in Russia every day

The sad statistics has been recently discussed with the participation of law-enforcement officers, lawyers and law-makers within the scope of a special conference in Moscow. Experts tried to analyze which measures could be taken to stop the unrestrained growth of mysterious disappearances, the Rossiiskaya Gazeta wrote.

The majority of the 120,000 people, who disappeared in Russia in 2007 alone, are men – nearly 59,000. About 38,000 of them are women, whereas teenage and underage children make 23,000 of the total number. Most of those people are found alive, although the process may take from several months to several years.

A precise legal definition of the term ‘missing’ can not be found in any normative document in Russia. The term usually indicates a human being, who unexpectedly disappeared under unclear circumstances and with no apparent reasons for it.

The only Moscow–based service, which collects the information about the found victims and dead bodies, is the Bureau of Registration of Accidents. The employees of the bureau say that people disappear most frequently during autumns and springs. Medics say that mental illnesses usually exacerbate during these two seasons.

Most harmless incidents occur when people decide to hide from their family conflicts or escape from their debts. A police officer told the story of a woman, who filed a report looking for her husband. The woman said that her husband simply left for work one day and never came back. The police found the man six months later: he moved to another region and was living with another woman. The man literally begged the police “not to find him.”

The statistics of the Internal Affairs Ministry says that most of the missing – 80 percent – are adults who depart from their homes in search of jobs. Many of them face hard reality and do not make any money at all. They eventually decide not to send home any news .

The ministry links the number of disappearances with migration and the unfavorable criminal situation in the country.

The number of missing people grows 12-15 percent every year. It is not just common workers who disappear without a trace. Police records say that not less than five high-ranking officials go missing every year along with about 200 military men and police officers.

About a fourth of those on the missing lists are people who make first steps on the way to homelessness. Such people may lose any connection with their relatives and friends. Others die under unclear circumstances or fall victims to unsolved crimes.

It is impossible to define the percentage of those who die as a result of their mysterious disappearances.

The police usually find up to 80 percent of missing adults and up to 90 percent of missing children. Children may often be kidnapped for panhandling or even sectarian activities. A sect with about 100 teenage members has recently been unmasked in the Siberian region of Russia. Nine of those teenagers were on wanted lists.

If a person goes missing in Russia, he or she will be sought after for 15 years, as the law stipulates. Afterwards, the person will be declared officially dead.

Up to 3,000 people disappear in Russia’s every large city (with a million-strong population and more) every year. However, a joint database of those people does not exist, whereas the information about the missing is spread between the police, hospitals and morgues.