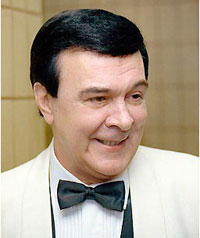 ITAR-Tass news agency cites his widow Tamara Sinyavskaya as saying he died at his Moscow apartment after a long illness. Other news agencies cite the government as their source.

Magomayev started his career as an opera singer, but sold millions of albums and concert tickets after switching to popular music. His fame was at its peak in the 1960s and 70s.

His grandfather, also named Muslim, was a composer of opera and folk music.

Muslim Mahammad oglu Magomayev (born August 17, 1942) was an Azerbaijani baritone operatic and pop singer of the 1960s and 1970s.

Muslim Magomayev represented one of the most respected artistic dynasties in Azerbaijan. His grandfather Muslim Magomayev (1885-1937), a friend and contemporary of the prominent Azerbaijani composer Uzeyir Hajibeyov, was one of the founders of Azerbaijani-composed music. Magomayev's father, Mahammad Magomayev, who died during World War II, was a gifted Scenic designer, and his mother was an actress.

Muslim learned to play a piano as a child, and began to take lessons from teachers of voice at the age of 14. He finished the piano and composition class of the musical school at Baku Conservatoire, and then graduated from the vocal class of Baku conservatoire. As a teenager he became interested in Italian songs, American jazz and other styles of popular music.

In 1962, at the age of 20, Magomayev first appeared in Moscow where he performed within the frameworks of the Days of Azerbaijani Culture. He sang two musical pieces in a gala-concert on the USSR's main stage, the Kremlin Palace of Congresses, and became a celebrity on a spur of the moment. A year later he gave his first solo concert in the Moscow Tchaikovsky Concert Hall to a full house and became a soloist of the Azerbaijan State Academic Opera and Ballet Theatre. Muslim earned fame in the USSR as an opera singer with Rossini's "Barber of Seville". He also became known for his arias from Puccini's "Tosca", Hajibeyov's "Koroghlu" and "Shah Ismayil", which was composed by his grandfather.

In 1964 – 1965 Muslim was on probation in the La Scala theatre in Milan, but turned down the invitation to sing in the Moscow Bolshoi Theater upon his return. Instead, the singer turned to popular music, becoming a pop idol for several generations of music lovers in the Soviet Union. Muslim Magomayev's popularity in the USSR was overwhelming. He quickly became a cult figure and gave three concerts a day filling out huge arenas all across the Soviet Union, while his albums sold millions.

In 1966 and 1969 Magomaev performed in Paris Olympia with great success. The director of Olympia Bruno Coquatrix offered him a contract, and Magomayev was seriously considering an opportunity to pursue international career, but Ekaterina Furtseva refused to grant the Ministry of Culture's permission, claiming that it needed Magomayev to perform at governmental concerts. In 1969 he received MIDEM Gold Disc Award in Cannes for the album sales of over 4,5 million units. In 1973, at the very young age of 31, Muslim was awarded the Soviet Union's highest artistic title: People's Artist of the USSR.

Magomayev was also known as a composer, writing several film soundtracks. In addition, Magomayev acted in films and hosted television and radio broadcasts devoted to prominent musicians of the 20th century.

Magomayev moved to Moscow in the early 1970s, where he worked in theater. In 1997, in recognition of Magomayev's professional successes, a Russian astronomical society named two planetoids of the solar system in honor of him and his wife, Tamara Sinyavskaya, a prominent Russian opera singer who was also awarded People's Artist of the USSR and worked as a soloist at the Bolshoi Theater.