The Russian Television Channel, the Institute of Russian History of the Russian Academy of Sciences and the Public Opinion Fund currently conduct an online poll within the scope of the project titled “Russia’s Name. Historical Choice-2008.” The project was launched to determine the most outstanding persona in the history of the nation. 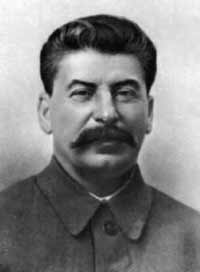 Preliminary results of the online voting have proved to be very unusual. Joseph Stalin takes the lead in the poll with 160,000 votes. The project currently determines 12 most popular and significant historical personas of Russia. The final stage of the project will start in September. Aside from Stalin, the top 12 of Russia’s historical leaders currently include: Vladimir Vysotsky (singer and actor), Vladimir Lenin, Nicholas II, Ivan the Terrible, Sergey Esenin (poet), Azexander Pushkin, Anton Chekhov, Peter the Great, Yuri Gagarin and even Boris Yeltsin.

It is worthy of note that many modern-day communists have a negative attitude to Joseph Stalin as a historical figure. Specialists say that the preliminary results of the online poll most likely mirror Russian people’s need in a strong hand. In addition, the goals which Russia faces nowadays are similar to the goals which Stalin solved during his stay at power. In addition, people closely associate Stalin with the USSR’s victory in WWII. Many Russians believe that the victory would not have been possible without Stalin.

Former President of France, Charles de Gaulle shares a similar opinion about Joseph Stalin. The French statesman wrote in his memoirs that Stalin had an immense authority not only in the USSR but also abroad. De Gaulle believed that Stalin was very good at taming his enemies. “He had more victories than defeats,” the former French president wrote.

Winston Churchill and many of his Western contemporaries also treated Stalin with respect.

Russia’s current strategic goals coincide with the goals which the USSR had during Stalin’s rule. A step forward from raw materials-based economy to high technologies and innovations is vital for Russia nowadays, as industrialization was vital for the USSR in the 1920s.

If the Russian administration in the face of President Medvedev and Prime Minister Putin launches a tough anti-corruption campaign, it would be possible to compare it with Stalin’s repressions of the 1930s-1940s.

It goes without saying that the question of Stalin’s repressions still remains one of the most painful ones for the Russian society. Those people, whose innocent relatives suffered from repressions, will never forgive Stalin.

However, many Russians still remember Stalin not as a tyrant, but as an outstanding statesman, which made the USSR achieve the peak of its power.