Russian women have always stood out of the crowd. They can put on large sunglasses and a baseball cap, hide blond hair under it, and walk around like you’re some Western tourist, but still someone will come up to you and talk to you in Russian. If you respond in English, they’ll be very surprised, as it’s often thought that Russians don’t know a foreign language. So what do foreigners think about Russians? What can they say about Russian women? 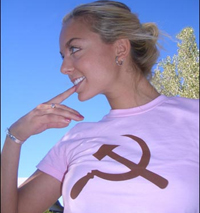 On Spanish and Italian resorts Russian speech already overshadows local dialects. In Turkey and Egypt Russians and Ukrainians have almost superseded Germans and Italians, at least, the latter prefer to rest in hotels with just their countrymen.

For many foreigners Russian women are very attractive. Foreign men often dream to have an affair with a Russian woman; some of them even later convince that the fleeting affair is one of the best memories in their life. Some people, that might have had negative experience with Russian women, on the other hand, are scared of them. Dating sites are full of ads saying that a well-off foreigner is ready to marry a woman form Russia even if she has children.

For foreign men Anna Kournikova is a symbol of Russian beautiful woman. Other famous Russians adored in the West, are Natalya Vodyanova, Evgeniya Volodina, Sasha Pivovarova, Anna Vyalitsina, Maria Sharapova and many others.

On various resorts Russian women are well-groomed, bright, but often wear the clothes that don’t match with the event. For instance, they can show up to the pool in the morning with evening make up and high heels on. Only Russian female tourists, while going on a trip to the mountains or ancient ruins, can put on high heels and then won’t come out of bus.

Hotels abroad often offer buffet lunch and here is where Russian females eat their head off, drink too much and after they get drunk, sing songs.

Every day millions of young Russian females go outside like if they go on the catwalk: with perfect hairdo, manicure and chiropody, best attires high heels on. In this way they go shopping. The distance of the trip doesn’t matter – it can be a small shop round the corner or a trade center on the other side of the city.

So what do foreigners thin about Russian women? Here are several opinions on the topic.

‘Russian girls played a big role in my life. But I know only girls from Saint Petersburg. We often come to this city and perform in clubs, then we drink and have fun. Russian girls are absolutely crazy. If they start partying, nothing can stop them. They don’t know when to stop – neither in alcohol, nor in love. They are very feminine and passionate, very beautiful and very woundable’. Yuha has been married 2 times. Now he is divorced with a woman from Saint Petersburg. He has a 2-year old son form that woman, but they live separately.

‘Russian girls know their worth, at least, the Muscovites. Of course, money is of prior importance for them. They all need a husband with an apartment, a car and a solid bank account. Many of them dream to leave Russia, because they think that life abroad is better, men are wealthier and houses are bigger and more beautiful’. Russian women are very housewifely, they can cook good, they are very hospitable, but unthrifty. But when we choose a wife, we don’t want to marry a housemaid. So sometimes the difference in mentality can harm the relationships. Russians are too reckless; they like to dominate in the family and they like things to go the way they want. Russian women are too strict with their kids, they are unpunctual and capricious.

‘I know many Russian female students. They are really very alike: both in appearance and the way they talk about the future and the way they choose men. They look down on their peers if they don’t have wealthy parents. They choose men that are 7 – 10- 15- 20 years older than they. This can, of course, be explained by financial reasons. Russian girls are very beautiful, but still very cold, provident, at least eh ones that I know’.

‘Russian ladies are very interesting and educated companions. They are always eager to support any topic for discussion. They are more interesting than the Swedes’.

‘Russian ladies are smart and clever. They know how to underline their advantages. They are also strong-willed and brave. They can do a lot for the sake of love and their family; they can forgive a lot of things. They are very woundable. But at the same time they are true women, a personification of womanhood’.