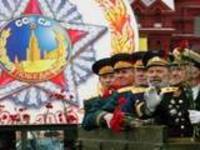 9th of May - Victory Day

Sixty-three years ago, the world finally breathed a sigh of relief as the Red Army planted the Red hammer and sickle flag on the Reichstag building. The forces of fascism had been thoroughly defeated. Thousands will gather once again in Red Square to commemorate the historic event. Others will join the commemoration electronically and/or spiritually.

On June 22nd, 1941 shortly past three a.m. German troops invaded Soviet territory. The invasion forces had 4.6 million men, 190 divisions, more than 4 thousand tanks, over 47 thousand guns and mortars, about 5 thousand aircraft and up to 200 ships. Soviet forces had 2 million 680 thousand men, 37.5 thousand guns and mortars, 1475 new tanks, 1540 new combat aircraft and a considerable number of older tanks and planes. In some areas the aggressor outnumbered Soviet troops by 3 or 4 times.

In the first three weeks after the invasion, German troops advanced 20 or 30 kilometers daily into Soviet territory. By mid-July German troops occupied Latvia, Lithuania, Western Ukraine and Belorussia. Then the Germans began their offensive on Leningrad. By November, people had begun to starve. For 900 days, the hero city of Leningrad suffered death, starvation and misery. It was not until the end of January 1943 that Soviet troops restored Leningrad's land link with the rest of the country. Until then, the city had been connected with the rest of the country only by the "Road of Life" across the Lake Ladoga.

On September 30th, 1941 the Germans launched "Operation Typhoon" to ultimately surround and eliminate Soviet troops near Moscow in order to take the city. Moscow residents were quick to build defense lines. In the suburbs of Moscow and in the city itself 450 thousand people, mainly women, erected defense fortifications.

Weapons and ammunition plants worked in three shifts around the clock during the war to provide defenders with everything necessary to resist the enemy.

By the end of October, the enemy advanced 230 to 250 kilometers towards Moscow. On November 7th a traditional parade of the Red Army on the occasion of 24th anniversary of the October Revolution took place on Red Square in Moscow. Army units left for the front right from the parade. .By December 25th the threat of Moscow being encircled had finally been removed. The Battle of Moscow lasted until April 20th , 1942. More than 3 million people were involved in the battle on both sides.

The Battle of Stalingrad began on July 17th, 1942 and lasted 200 days. More than 2 million people took part in the battle from both sides. By August 23rd German units broke through to the bank of the Volga. By mid-November German troops occupied most of the city. In two parts of the city they had reached the Volga but failed to cross it.

In the winter of 1942, the German offensive ground to a halt. On November 11th German troops made a last attempt to capture Stalingrad. November 19th through February 2nd of the next year marked a turning point of the war with the counter-offensive of Soviet troops on the Stalingrad front. As a result, the German army was encircled and routed. Enemy losses in the Battle of Stalingrad totaled 1.5 million.

The Battle of Kursk lasted from July 5th to August 24th 1943. Taking part in the battle were more than 4 million people, over 69 thousand guns and mortars, more than 13 thousand tanks and self-propelled artillery pieces and up to 12 thousand combat aircraft.

By the beginning of 1945, the Soviet army reached its highest level in all the war years. On the Soviet-German front the Soviet Army had 6.7 million people, 107.3 thousand guns and mortars, 12.1 thousand tanks and self-propelled artillery installations and 14.7 thousand war aircraft. In mid-January Soviet troops launched a large-scale offensive on the front from the Baltic Sea to the Danube.

Again on April 16th Soviet troops launched an all out offensive. The operation involved 2.5 million personnel, 41,600 guns and mortars, 6,250 tanks and self-propelled artillery guns, 7,500 war aircraft, including 800 long-range aircraft. A key role was played by the famous Russian "Katyusha" rockets. On April 25th Soviet and American troops met on the Elbe River in the area of Torgau. On April 30th Soviet troops began storming the Reichstag. The enemy put up fierce resistance, but the Soviet soldiers pressed forward fighting room to room, hallway to hallway. On the early morning of May 1st a red banner was flying on the Reichstag. The banner was erected by M. Yegorov and M. Kantaria.

The war became a real fight for survival because of the outrageous cruelty with which the German troops treated Soviet POWs and Soviet civilians on the occupied territories. They were consistently slaughtering them, and as a result the Soviet Union sustained terrible, horrendous losses.

It’s not too difficult to reflect on those who live with war, death and danger every day and night. Since the Great Patriotic War, there hasn’t been a single period of total and complete peace on the globe. There has always been a war going on somewhere, someplace.

The 9th of May Victory Parades are always awesome displays. So many heroes….so many lives lost, as many as 27 million Soviet citizens lost their lives. So many heart wrenching stories of personal sacrifice, hardship and horror. Soldiers, medics, airmen and women, partisans, workers and citizens all fought and endeavored together to save the country and the world from fascism. Thinking about these individuals is almost a religious experience.

Eight of every ten German soldiers killed were killed on the Soviet front. As the years pass, the ranks of surviving heroes attending gets smaller.

The many stories of these heroes are monumentally awesome and inspiring. Honoring and remembering them and placing flowers on a monument….are simple gestures full of significance. It is the least one can do to honor those who gave their all so that the light of freedom would not be extinguished from this world. But more importantly, one needs to dedicate oneself to the eternal values of freedom, human dignity and to the rights of humans to live their lives without fear, humiliation or suffering.

Never in history has there been a more inspiring display of courage and sacrifice. War is ugly and war is hell, but the honorable defenders of freedom and humanity are truly beautiful. One would be hard pressed to find a more heroic display in the entire history of the world as the fight of the Soviet Union to defeat the forces of fascism. We shall always be indebted to those great heroes. No honor, no tribute, no remembrance can ever be enough. And for this reason, the Soviet Union will always hold a place of honor and reverence for all freedom loving people everywhere, having earned the eternal admiration and gratitude of the people of the world.