It was the first time since the collapse of the Soviet Union when Russia showcased its military might in all its glory. On May 9 2008 tanks and missiles rolled across Red Square to mark the 63rd anniversary of Victory in World War II. 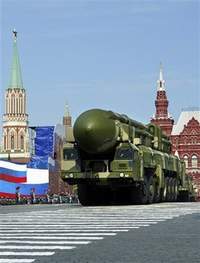 Dmitry Medvedev, the new President of Russia, who officially took office on May 7, delivered a speech to the nation during the parade. Unlike Putin, Medvedev preferred not to draw parallels between the US administration and Nazi Germany.

However, he said the history of World War II had demonstrated that military conflicts are rooted in "irresponsible ambitions which prevail over interests of nations and entire continents."

"We must not allow contempt for the norms of international law," he said in what sounded like a veiled criticism of the United States and its Western allies.

Russia has consistently criticized both the U.S.-led war in Iraq and wide Western recognition of Kosovo's independence as flagrant violations of international legal norms.

A stern-faced Putin, who was named prime minister a day earlier, hovered at Medvedev's shoulder at a colorful podium and staging built to hide a mausoleum where Soviet founder Vladimir Lenin is kept.

As Medvedev spoke, Putin's face was prominently shown in TV broadcasts _ an image that played to the wide belief that the ex-president will continue calling the shots.

Medvedev _ Russia's third post-Soviet president_ hailed the resurgence of the military which he said can "give a reliable protection to the motherland."

"Our army and navy are getting stronger. Just as Russia itself, they are gaining strength," he said.

Over 100 combat vehicles, including intercontinental ballistic missile launchers, rolled across the famed cobblestoned square, and strategic bombers and fighter jets roared overhead in the first such display in 18 years. Medvedev smiled frequently as he watched the parade, which during the Soviet Union was an annual exercise in saber-rattling directed at the West.

Russia's military spending has increased eightfold to an annual US$40 billion ( Ђ 25.9 billion) during Putin's eight-year tenure, thanks to the nation's oil bonanza. Analysts, however, say the armed forces suffer from the same problems that dented its capability and prestige since the Soviet collapse.

Widespread bullying of young conscripts by older soldiers has made draft extremely unpopular, and the once-proud military has been plagued by rampant official corruption and mismanagement. Despite repeated pledges by Putin to modernize military arsenals, the armed forces have purchased only a handful of new combat jets and several dozen tanks.

Most of the combat equipment shown in Friday's parade was slightly modernized versions of the Soviet weapons designed in the 1980s.

"As the Soviet Union in the past, Russia wants to demonstrate its might to potential enemies," military analyst Alexander Golts wrote in the online Yezhednevny Zhurnal. "But the West clearly understands the true picture behind the talk of 'rising potential."'

Modern communications and control systems remain scarce, and a Russian equivalent to the U.S. GPS satellite navigation system has failed to come on line as scheduled this year amid equipment shortages. Even such basics as night goggles, portable radios and satellite phones are still rarities.

The navy has been in particularly poor shape. Soviet-built nuclear submarines frequently need repairs and rarely leave their bases. The first in a series of new nuclear submarines, Yuri Dolgoruky, is to be commissioned later this year, but the Bulava nuclear missile developed to arm it has failed tests and its deployment prospects are uncertain.

In a recent analysis of Putin's presidency, former government ministers Boris Nemtsov and Vladimir Milov wrote that official corruption was the key reason behind the failure to upgrade military arsenals, despite a steep increase in funding.

"The lack of efficient civilian control over military spending has encouraged corruption and swelled weapons prices," Nemtsov and Milov wrote. "The number of weapons delivered to the military is scandalously small."

Growing military spending did allow the military to intensify combat training and increase military wages. Putin last year ordered the resumption of strategic bomber patrols, and a Russian naval squadron recently visited the Mediterranean in the largest such deployment since the Soviet times.

Putin has taken an increasingly assertive posture in relations with the West, staunchly opposing the U.S. intention to deploy missile defense sites in Poland and the Czech Republic, and NATO plans to incorporate Ukraine and Georgia.

He suspended Russia's obligations under a Soviet-era arms control treaty limiting the deployment of aircraft, tanks and other weapons in Europe, and he threatened to point Russian nuclear missiles at nations which would host U.S. missile defense sites.

Analysts say that Russia's top military brass and defense industries pushed the Kremlin to view the West as an enemy.

"Putin has failed to set a rational military policy," said Pavel Podvig, a research associate at Stanford University's Center for International Security and Cooperation. "The military brass and weapons industries have been allowed to set course, and they did what they got used to. Generals always fight the last war."