Christmas is considered to be the mother of all holidays. The significance of the holy night, when baby Jesus was born is immense for the entire world. The course of new history and the modern-day chronology is directly linked with the birth of Jesus Christ. 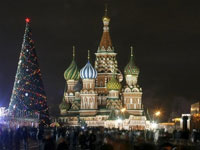 Christmas used to be the most popular and the most important holiday in Russia. On Christmas Eve Russians were not allowed to eat and celebrate during the day. The holiday would begin for everyone at night, when the first star appeared on the sky. Parents would tell their children stories about the birth of Jesus Christ, how the Three Wise Men came to worship baby Jesus.

A wonderful tradition to decorate a fur tree appeared in Russia during the time of Peter I the Great, the Emperor who ruled Russia in the 18th century. The first Christmas tree came to Russia from Germany. The evergreen tree is still considered to be a symbol of everlasting life. Fur trees appeared in every Russian home soon afterwards.

On Christmas day Russians used to visit each other, sing church songs and Christmas carols hailing the birth of baby Jesus.

Christmas used to be Russia’s biggest holiday before the Revolution of 1917. On Christmas day of December 25, 1812, Emperor Alexander I signed the manifesto about the creation of the temple to honour Russia’s victory over Napoleon "to signify Our gratitude to Divine Providence for saving Russia from the doom that overshadowed Her". The document marked the birth of one of Moscow’s best-known cathedral, the Cathedral of Christ the Saviour, the tallest Orthodox Church in the world.

The Cathedral had taken many years to build and did not emerge from its scaffolding until 1860. Some of the best Russian painters (Ivan Kramskoi, Vasily Surikov, Vasily Vereshchagin) continued to embellish the interior for another twenty years.

After the Revolution and, more specifically, the death of Lenin, the prominent site of the cathedral was chosen by the Soviets as the site for a monument to socialism known as the Palace of Soviets. This monument was to rise in modernistic, buttressed tiers to support a gigantic statue of Lenin perched atop a dome with his arm raised in blessing.

On December 5, 1931, by order of Stalin's minister Kaganovich, the Cathedral of Christ the Saviour was dynamited and reduced to rubble. It took more than one blast to destroy the church and more than a year to clear the debris from the site.

With the end of the Soviet rule, the Russian Orthodox Church received permission to rebuild the Cathedral of Christ the Saviour in February 1990.

A construction fund was initiated in 1992 and funds began to pour in from ordinary citizens in the autumn of 1994. The completed Cathedral of Christ the Saviour was consecrated on the Transfiguration day, August 19, 2000.

Bolsheviks banned the holiday of Christmas in Russia nationwide from 1917. The Bethlehem star was replaced with the red five-point star. The green fur trees were also banned as a symbol of Christmas, the holiday of the bourgeoisie. The tree returned to Soviet Russia in 1933 with a new title - the New Year tree.

However, Russians continued to celebrate Christmas at their own risk. Christmas services were secretly held in private homes, in concentration camps and in exiles. People had courage to celebrate the brightest day of the year taking the risk of losing their jobs, freedom and even lives.

Christmas finally returned to Russia in 1991. It became an official holiday for all nations of the Russian Federation. However, Russia celebrates Christmas on January 7, on the new calendar style.