Hospital for Muslim patients to open in Moscow

"A first-ever medical centre for Muslim patients is expected to open in Moscow soon," said Victor Kisin, the president of Price and Quality federal system of policlinic institutions. 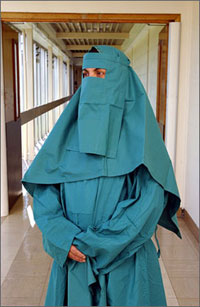 Hospital for Muslim patients to open in Moscow

The idea to open such a centre was originally proposed by the Council of Muftis (the highest official rank in Islam) of Russia and the Ministry of Health and Social Development. Russian Muslims and embassies of Islamic countries in Russia were eager to have such a centre in Moscow. “There were occurrences when they had to send their staff, ambassadors and their wives, to treatment overseas,” says Ravil Gainutdin, the chairman of the Council of Muftis of Russia. “I’m sure that this initiative would be positively accepted in the society. It should improve not only the health of Muslim people but also the mutual understanding between Russian and Muslim nations and religions,” the mufti stressed out.

The centre has been organized according to cultural values of Islam, its demands and peculiarities.

The main difference from the usual clinic is that there are male doctors for male patients and female specialists for female patients. The personnel clothing meets the standards of Shariah laws: a Muslim doctor would be dressed from head to foot. Only hands are allowed to be bare, whereas women are supposed to wear hijabs. It will be allowed to prescribe only alcohol-free drugs.

There are special rooms in the new clinic for ablution and prayers (with a dividing screen for men and women). There is also a halal refreshment room, where food does not contain animal fat. Vegetable oil is used instead of butter. Food should also contain no alcohol - its consumption is forbidden by Islam. It is generally believed that Muslims pay much attention to their food, as these requirements are given by Allah whom they honour and respect.

The doctors in the Muslim clinic will have special qualifications. They will approach every patient according to Quran, the Holy Book for all Muslims.

A system of specialized Muslim-oriented drugstores would be provided in Moscow in the near future.

The cost of services in the new centre is based on the income of middle class Muscovites.

The doctors of the Muslim Centre will always rend assistance to non-Muslim patients.

Investments in the project total $10 million. Similar centers will open in other cities and regions of Russia, if the Moscow center proves to be successful. The clinic management believes that religion-oriented medical service would be in demand in Russia.