People may catch HIV though oral sex with infected partner

Researchers have determined how people can catch HIV that causes AIDS though oral sex with infected partners. As it turned out, there may be no injuries inside of the mouth but a partner may still catch the virus while having oral sex. After twenty five years of an extensive research American doctors have determined that humans have a molecule that comes in contact with the virus. 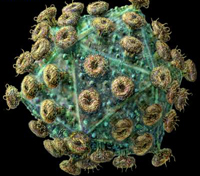 People may catch HIV though oral sex with infected partner

Up to now many doctors doubted that their HIV-infected patients were honest when said that they had no unsafe sexual contacts. Doctors believed that their infected patients, and especially men, would not confess that they had oral sex with other infected partners. El Pais reports that researchers have discovered a special molecule in the tonsil cells, and the discovery has dispelled doctors’ bias as concerning the problem.

It was traditionally believed that only people with seriously injured gums could catch HIV when having oral sex with infected partners. However, the fact was not quite agreeable for all especially when it was determined that human saliva has a strong antiviral action. People will not catch HIV if use the same glasses or forks that infected people have previously used, or even if they kiss infected partners. People and many animals instinctively lick their wounds to have primary disinfection thanks to the antiviral action of their saliva.

The recent discovery gives a reasonable explanation of HIV transmission. Researchers from the US National Institute of Health say that tonsils have the CXCR4 receptor on their surface that helps the virus contact infected cells and communicates its genetic material to a human organism.

The molecule has been among the first molecules tested in a new therapy for treating the infection. The gum surface is covered with different type molecules called keratins that perform a barrier function and make gum walls thicker. The results of the research were published in American Journal of Pathology.