There are special diseases that are so old that it is known that even Egyptian mummies and tsars’ families were suffering from them. No medications have been yet created to cure them, and no doctor can help get rid of such diseases. Doctors say that such diseases that are called hereditary diseases emerge as a result of natural selection. These diseases are programmed to progress only. 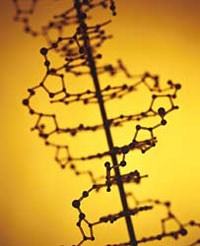 Human genes include the entire complex of information about people’s looks, behavior, likes and dislikes, and diseases. Generally, almost any pathology can be explained with genetics. But a real inherited disease would have never developed if there were no genetic failures.

Inherited diseases existed in all epochs. Researchers studied the unnaturally elongated skulls of Nefertiti and her family members and supposed that the tsarina and her relatives had been suffering from an inherited disease, supposedly the Minkovski-Chauffard syndrome. And this fact is no surprise indeed as the ruling dynasties of the ancient Egypt practised incestuous unions.

It is known that Prince Alexey, the son of Russia’s last tsar Nikolay II was suffering from haemophilia, the hereditary disease that disturbs blood coagulation, can be transmitted by mothers and passes to their sons only. It is highly likely that Alexey’s great-grandmother Queen Victoria of Great Britain was the first to carry the gene of haemophilia.

DNA is the carrier of all information about a human. Its hard task is to code billions of features of every particular man to distinguish him from other human beings. At that, DNA is as small as a karyon measured in microns. DNA makes up special structures, chromosomes.

Every cell of a human body contains forty six chromosomes, two of them are sex chromosomes and other forty four chromosomes do not specify sex. Forty six is an even number, and it is logical that we inherit one half of the chromosomes from mother and the rest from father.

Other chromosomes, not only the sex ones, can double or treble and even fall out. Very often this happens to the chromosome 21; and when the number of the chromosome 21 trebles it entails the well-known hereditary disease Down’s syndrome.

How do the excessive chromosomes appear? Researchers say that these chromosomes appear as a result of irregular cell fission of an embryo at a stage when a woman is not even aware of her pregnancy. Theoretically, failures may occur at any stage.

Besides the abnormal number of chromosomes people may have mutations of DNA sectors and of some particular genes. Any defect of the genetic material may entail serious consequences. As is known from experience, a carrier of numerous mutations sometimes does not even suspect that they exist. But at the same time replacement of just one gene may turn out to be fatal.

Mothers and fathers equally transmit genetic information to their children. But it is not quite correct from the genetic point of view toexpect that a person will suffer from the same diseases that his mother or father did.

Let us take cancer. This disease can not be inherited; people rather inherit susceptibility to cancer. It means that you may have no cancer in case if any of your close relative has ever had it.

It is also known that varicose disease is not inherited. Researchers who thoroughly deciphered the human genome could not discover the varicose gene. People can just inherit predisposition to varix dilatation, delicate veins and valves from their parents. And this does not mean that varicose disease will inevitably develop in such cases. People wishing to avoid varicose disease should not spend much time sitting or standing, wear tight clothes and foot wear and certainly mind their weight.

It is incredible but in few cases inherited diseases may turn out to be good for people. In Africa, people may suffer from sickle-cell disease and have red blood corpuscles transformed into crescents. People suffering from the disease are not susceptible to malaria, the biggest trouble on the African continent.

It may unfortunately happen that absolutely healthy parents may reproduce a generation of sick children. Each human has so-called ballast consisting of genes controlling development of a disease. They are inactive when suppressed by normal genes. If both of a couple having such inactive genes decides to become parents their children will suffer from an inherited disease.

Doctors say that some inherited diseases can not be detected on a baby’s birth. Some types of mental deficiency reveal themselves just when a child begins to walk or even becomes a pupil. Hereditary Huntington’s chorea can be identified only with patients older than forty. Couples wishing to adopt children should keep this fact in mind.

Doctors give some essential recommendations to those who run the risk of transmitting or having a hereditary disease.

Women who plan to have babies should bear babies while they are still young. It is a proven fact that older women run higher risks to have babies with Down’s syndrome. Indeed, negative factors cause mutations to a woman’s ovules during her life since her very birth. So, mothers over forty risk to deliver babies with Down’s syndrome, and the risk makes up 1 to 84 (for mothers aged 16 the risk is 1 to 1,640).

It makes sense to consult a geneticist before planning pregnancy. It would be good for a couple to know what hereditary diseases they have probably inherited from their ancestry.

Fortunately, modern medicine can diagnose at least some hereditary diseases before a child’s birth. Pregnant women should have planned ultrasound examinations and blood tests, and even biopsy of chorion if necessary to find out if an embryo may have hereditary diseases or not. Biopsy of chrion is a procedure that allows doctors to study all gene and chromosome anomalies of an embryo within the period of the 8-12th weeks of pregnancy.