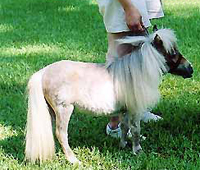 Subjects perceive humans, parts of humans, animals, and inanimate objects as substantially smaller than in reality. Generally, the object perceived appears far away or extremely close at the same time. For example, a family pet, such as a dog, may appear the size of a mouse, or a normal car may look shrunk to scale. This leads to another name for the condition, Lilliput sight or Lilliputia hallucinations, named after the small people in Jonathan Swift's Gulliver's Travels. The condition is in terms of perception only; the mechanics of the eye are not affected, only the brain's interpretation of information passed from the eyes.

The syndrome is associated with, and perhaps in part caused by, the classical migraine headache. Occasionally, Alice in Wonderland syndrome is named as one of the first symptoms of mononucleosis. Micropsia can also be caused by complex partial epilepsy, and the actions of various psychoactive drugs (notably dextromethorphan).

Small children, usually between the ages of five and ten, form a large proportion of those afflicted by spontaneous temporary micropsia. Micropsia tends to occur during darkness, when the brain lacks visual size references.

Micropsia not only affects visual perception, but also one's hearing, sense of touch, and sometimes one's own body image; the syndrome continues even when the eyes are closed. Peripheral symptoms include anxiety, apraxia, and agnosia. Micropsia is also commonly related to patients suffering schizophrenia.

The disorder is named after Lewis Carroll's Alice's Adventures in Wonderland, where the title character experiences many situations similar to those of micropsia and macropsia. Because Lewis Carroll recorded at least one episode of classical migraine, scholars have speculated that he may have experienced this syndrome himself, wikipedia.org reports.

A migraine sufferer's report of the Alice in Wonderland syndrome

"Throughout my early childhood I suffered from migraine headaches. My mom got migraines too so she just gave me children's Tylenol and told me to tough it out. When I was 10 years old, I woke up one morning and I almost felt like I was still asleep and dreaming. I was still laying down in my bed and I held out my hands in front of me and they didn't feel like my hands, they felt like long skinny dry twigs.

If I concentrate hard enough I can 'remember' the feeling and my hands start to feel that way again. After a few minutes it all went away and I didn't say anything to my parents about it. But for the next couple of weeks it happened more and more often, usually in the evening. Most of the time it was when I was sitting still, I would feel so incredibly heavy that I was sure I couldn't move any part of my body and my depth perception felt like it was completely off.

One time while I was walking down the hall I felt like the walls were rushing past me at 50 mph. One afternoon after school I was sitting on my bed, which was a day bed with a spiraly-cast iron design on the headboard and while I was looking at it it started to move and rotate, like it was turning like a wheel. When I tried to explain this to my parents I got frustrated because my eyes were telling me that my bed wasn't moving, but my brain was telling me that it was moving.

Every episode was accompanied with a strange feeling that at the time I didn't understand, but in retrospect I would call it an extreme-version of light-headedness, kind of like you're on laughing gas but highly uncomfortable and very scary. And every episode was followed by a killer migraine headache...

An EKG, an MRI, and a couple of months later the diagnosis was I had an 'abnormal brainwave' which was 'triggered' when I had a migraine, causing hallucinatory side effects to my migraine. The doctor actually called it 'Alice In Wonderland Syndrome' saying that it was compared to how Alice felt while tumbling down the rabbit hole. At the time, we thought this could possibly be the delusions of a Southern California doctor who had spent a little too much time trying out 'herbal' remedies. But he had newspaper clippings and journal clippings to back up his theory."