The human body is a complex biochemical system. The body does not seem to have any unnecessary organs. In actuality, some people can be born with the so-called vestigial organs i.e. those which fell into disuse in the course of evolution. Atavisms or traits which disappeared generations ago can reappear in humans too. In total, about 90 excess organs can be evidenced. 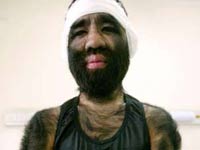 The vermiform appendix is a short thin blind-ended tube, attached to the end of the caecum. It used to be a reservoir for accumulating cellulose, and participated in the formation of blood by producing leucocytes. The function of appendix ceased to exist after humans started to eat more refined food. The appendix is sometimes liable to become infected and inflamed, resulting in a condition that requires surgical removal of the organ.

Some people do not have the appendix at all. I remember a case history that I happened to witness while studying at the Tomsk medical school. A patient displaying the clear signs of appendicitis was rushed to a hospital. A surgeon decided to perform appendectomy. Much to his surprise, he failed to locate the appendix in the patient’s abdomen. Academician A. Savinykh was brought in to assist the operation. A thorough examination of the abdominal area was conducted, but to no avail. No appendix was found. The surgeons sutured the edges of the wound together. The postoperative period ran quite smoothly, no complications detected. The patient was discharged from hospital as planned.

Nature provided us with some unusable muscles, just in case. For instance, the subclavian muscle lying between the first upper rib and the clavicle has no known function. The volar muscle connects the elbow and the wrist. It is no longer used by man for hanging on the branch of a tree. However, the muscle is used as a material by plastic surgeons. Incidentally, about 12% of humans do not have the volar muscle at all.

Man must have moved his ears constantly in the distant past. The movements were not designed for scaring off mosquitoes and flies. They were probably indispensable so that man could detect some warning sounds and run for cover in time. A special organ or “radar” and the external muscles of the ear were used for detecting sound sources. The “radar” in now largely unusable yet some people retained the muscles in the shape of the so-called Darwin spot located on the skin at the top of each pinna.

Additional cervical vertebrae can only put more pressure on a neurovascular junction when the body is subjected to stress or undergoes certain postural changes. As a result, the patient begins to suffer from pain whose intensity may vary. The pain can be relieved only by surgery. An excess cervical vertebra can enhance the physical attractiveness of the neck. At the same time, it can become a source of pain.

The coccyx is a vestigial tail otherwise known as “coccygeal process” or “cossygeal projection.” The coccyx enables most mammals to maintain their bodies in a state of equilibrium when they are in motion. There is no need for the coccyx in man. The fracture of it is an extremely painful injury that has to be treated using powerful drugs.

Speaking of atavisms, we should start by mentioning a beard, mustache, brows – the secondary sexual characteristics in men; bodily hair on the back, chest and extremities. For reasons unknown, nature has equipped some males with nipples and an organ resembling the uterus. Some women were furnished with a pair of ducts located near the ovaries. Those ducts look very much like the ducts called vasa diferentia in men. The atavistic organs mentioned above will require qualified medical help if inflamed or infected.

Such vestigial traits as bony ridges sitting low above the eyes, anomalies of the jaws or large incisors cannot make up a comely face, especially in case of the female of the species. Some scientists believe that the bones of the nose are a rudimentary structure used mostly for warming the air on its way to the lungs. Man would be less frequently affected by a variety of respiratory diseases if the bones of the human nose were smaller, the size of a nose of a manlike monkey.

The olfactory cells contained in the mucous membrane of the nasal cavity have long lost the ability to identify many subtle smells. However, a handful of people have far more developed olfactory cells around the nasal septum. Such people are often employed by manufacturers of perfumes and toiletries.