Compared with hairy legs, small breasts and other trifles of the kind, cellulite is arguably the biggest cause of concern for women. 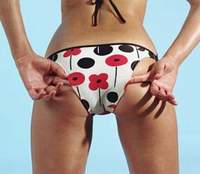 Cellulite refers to the dimpled appearance of the skin in which fat cells stopped functioning in a normal manner. The fat cells cease secreting their vital activity products while accumulating unwanted toxins and lymphatic waste at an increased rate. The dimpling of the skin is caused by the protrusion of subcutaneous fat into the dermis creating a disgusting wavelike effect on the outer layer of the skin, the epidermis. It is understood that cellulite is not related to being obese. Even the smallest amount of fatty tissue can fall victim to cellulite.

Disruption in the functioning of fat cells is normally caused by problems in the process of metabolism. Metabolism problems may be associated with improper nutrition, hormonal unbalance, and unhealthy life style. It stands to reason that people who display cellulite are often overweight. This is why we tend to form a link between cellulite and obesity.

Just a handful of people are ready to admit that cellulite is mostly an invented problem. Contrary to claims printed by some glossy magazines, the condition does not affect 90% of women, if there is such a problem as cellulite at all.

According to specialists, the initial stage of cellulite is considered as something akin to the norm in terms of physiology. Cellulite in the second and third degrees is considered a cosmetic flaw. Only cellulite in the fourth degree (highly visible when the muscles are relaxed, skin looks cold and bluish, and a pinch test is painful) is regarded as a pathology i.e. not healthy or normal.

Are you sure that you display cellulite in the fourth degree? Perhaps you have been led astray by those ostensibly perfect bodies as seen in the glossy magazines? Now you seem to detect signs of cellulite even on the normal healthy skin. Probably an orange peel syndrome exists only in your imagination. Maybe the reason why a piece of your smooth skin looks blue is because you held it between your viselike fingers for five minutes?

It is an open secret that the majority of people tend to go daydreaming when faced with a serious problem. Just a few people are ready to face the music and admit that everything depends on their own efforts. Everybody wants a problem to be solved at a wave of the wand or with the help of the Good Witch. People are fond of fairy tales. There is a variety of fairy tales to choose from.

Some women prefer the tale about the Sleeping Beauty. Every morning they are hoping to see magical changes take place in their mirrors. They make an effort to make their dreams come true. They regularly visit beauty parlors and pay lots of money for LPG-therapy, Mesotherapy, Endermology, laser treatments, massage, liposuction, lymphatic drainage, body wraps, and ozonetherapy. Other women prefer playing the part of Cinderella. You know, I am a poor girl who is ready to work on those problem areas of my body night and day… Cinderellas are normally seen jogging in the morning. They also go on a low-fat diet by eating yogurts and rice. And they try hard to wash away their fat deposits while rubbing them off with a rough sponge. Unlike Sleeping Beauties, Cinderellas can not afford all treatments mentioned above.

Yet another group of women is in love with the image of Snow White.

They lay all the blame on the wickedness of nature. Such women rub in another “wonder drug” into their bodies while taking a bite of some poison shaped like a hearty ham-and-mayonnaise sandwich.

In the end, all these fairy tales end up the same – “the two of them lived a long and happy life and closed their eyes on the same day.” However, “the two” does not mean that some Mr. Right or a knight in shining armor sank into the grave along a protagonist. Cellulite is the other lead character of the play. All the ladies pictured above take a few steps in the right direction yet they let a fairy do the most important part of the job. Too sad, fairies belong to fairy tales, they do not exist in a real world.

Only a comprehensive approach to cellulite reduction can help you combat cellulite in a quick and effective manner. Dieting cannot get rid of the dimpled appearance; massage is useless if it is performed without exercises for the muscles. Your fight against cellulite can be a success story only if you do a combination of effective treatments. You can eliminate cellulite for good if certain requirements are met.

Some of the guidelines you are recommended to follow are as follows:

1. Watch what you eat. Refrain from eating food cooked by frying; do not eat candy, pastry etc. Eat smaller portions but decrease intervals between meals. Proper nutrition can help you slim down and tackle metabolism problems. It can also give a boost to the body’s ability to drain unwanted toxins and lymphatic waste.

2. You can improve blood circulation around the fat cells by doing the lightest type of exercise for the muscles of the affected areas.

3. Manual massage or LPG-therapy can help “break down” an accumulation of the damaged cells.

4. Special cosmetic measures combined with the application of body wraps can have a beneficial effect on microcirculation, thereby improving skin tone and elasticity.

The guidelines look quite reasonable. It is believed that a variety of treatments (LPG-therapy, ozone therapy, talasso therapy) are also quite effective for temporarily reducing the appearance of cellulite in case you want to yield a short-term result. However, you will have to repeat the whole course of treatments every six months or once a year; otherwise your cellulite will be back in place. A single-time effect does not last long. It is like staying on a diet for two months in order to lose weight. You can lose weight, no problem with that. But you are likely to gain it back shortly after you start gobbling up your regular junk food again.