When being on a top floor of a Moscow building, one can see light haze over the city. It has been typical of Moscow for many years already. Sometime people call the haze smog but it is not correct. Yelena Lezina from Mosecomonitoring unitary enterprise says that smog is an ultimate form of radiation fog, a mixture of smoke and fog which is not typical of Moscow. There is another type of smog appearing as a result of photochemical reactions in outbursts under the solar radiation effect; it is a steady bluish haze of acrid gases without fog.

Nikolay Yelansky from the Russian Academy of Sciences' Aerophysics Institute states the Moscow atmosphere is a chemical reactor where gas and aerosol admixtures interact and produce new compounds that may be even more toxic than original outbursts. And people are in the very center of the reactor. The statement is reliable as the Aerophysics Institute does expert monitoring of the environment in various parts of the country.

Yelena Lezina from Mosecomonitoring says that ecological situation in Moscow has not become worse within the past five years. The monitoring enterprise states that motor transport is the main air pollutant in Moscow; heat-electric generation stations and industrial enterprises also contribute to the air pollution.

There are three million cars in Moscow today; they particularly pollute the air when caught in traffic jams. Even though the Moscow authorities have taken several serious measures to prevent traffic jams, no considerable effect has been achieved yet. People living in apartments with windows facing bysy highways know perfectly well that they cannot open windows because of the terrible air pollution. Experts from Mosecomonitoring say that fortunately motor transport causes just local air pollution. The concentration of polluting substances is minimal two or three building lines away from arterial roads.

How can ordinary people secure their health against the injurious effect of the polluted atmosphere? Ecologists and environmental monitors recommend to avoid walking along busy arterial roads and do not open windows facing busy highways.

People should remember that air inside apartments located in old houses contains admixtures of lead and other high-density metals. These admixtures appear from old paints which used to be environment unfriendly. There are many houses where phenol is registered. Phenol is one of the most common air pollutants; it is particularly dangerous for people as it cannot be removed from the organism, strikes liver, lungs and causes cancer. 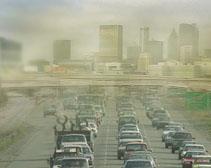 Some time ago, construction workers actively used asbestos which is a strong carcinogen. In the course of time asbestos decays and asbestos dust may accumulate in human organisms thus causing cancerous diseases. At that, it may take a long period before people may feel that they are poisoned with asbestos.

In the past years, asbestos was actively used in construction of apartment blocks and in manufacturing of roof slate. Production, sale and usage of asbestos in construction works is prohibited in Russia since April 1, 2001.

Radon, the inert gas forming in radioactive minerals and appearing on the surface is particularly dangerous for people living on the ground floors of apartment blocks. It may cause cancer of lungs.