Advertising of medications to fight abdominal distension and gas-formation will inevitably result in a bigger number of patients suffering from gastrointestinal disturbances and diseases of other organs, doctors say. 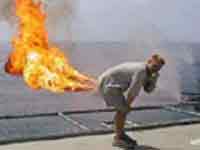 People suffering from rumbling in the stomach and other bizarre sounds going from inside should first consult a gastroenterologist before getting some medications at a next door drug store without special prescription. Excessive gas-formation in the stomach is called meteorism. This disease usually accompanies other ailments, Doctor of Medicine Professor Yury Vasilyev, the head of a department at the Gastroenterology Research Institute says. Meteorism is in many cases the symptom of peritonitis, small and large bowels obstruction, lamblia cholecystitis, cardiac insufficiency, chronic gastritis, affection of pancreas and intestines (pancreatitis, tumors and irritable bowel syndrome).

Before taking a pill that may help in fighting meteorism a patient must make sure that he has none of the above stated diseases. This should be first of all a visit to a gastroenterologist and then dysbacteriosis and lambliosis tests. To diagnose a patient, a gastroenterologist needs to know how soon after having a meal a patient begins to suffer from gas-formation and the character of his stool.

If a patient has a defecation disorder he or she probably has fermentation and bacterial decay in the intestines. Intestinal fermentative dyspepsia reveals itself with splashes, rumble, intensive gas-formation, diarrhea and constipation.

The diagnosis requires that a patient should keep up to a diet that contains little carbohydrates, fermented juice, unripe fruits and berries, no carbohydrated drinks and beer. Products that contain much protein, such as meat, fish and milk, intensify decay processes in the intestines.

Together with the diet, a patient suffering from meteorism also needs to take care of the intestines microflora and take modern effective medications for this purpose. Doctors emphasize that sorbents, activated carbon for example, must be made absolutely ground before consumption.

Mind that no modern widely advertised anti-meteorism medication will be really effective unless you consult your gastroenterologist.