Sex after childbirth: another tough job of motherhood

The joys of motherhood should not, without doubt, be underestimated. On the other hand, lots of young mothers find it difficult to resume sexual activity in the first weeks and months following childbirth. Many women claim that making love in the puerperal period invoked the pain and discomfort associated with the loss of virginity. 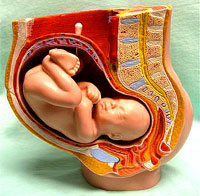 Sex after childbirth: another tough job of motherhood

There are a handful of lucky women who start dreaming of making love while still in a maternity ward. It is worthy of notice that their dreams come true in the end. However, those women are few in number. According to statistics, about 50% of young mothers experience difficulties having sex during a period of 3 months following childbirth, whereas 18% suffer from similar problems throughout the entire year after delivery. What are the methods and recommendations for tackling the problems?

First off, a woman should start to engage in sexual intercourse not earlier than after 4-6-week period following childbirth.

The vagina must return to its normal size after childbirth too. The process normally takes up to six weeks to complete. Gynecologists believe that women in the puerperium can benefit from the Kegel exercises.

Gynecologist Arnold Kegel devised special exercises in the mid-1950s. The exercises were meant for women who developed postnatal enuresis, a condition involving the involuntary passing of urine after childbirth. Apart from helping women cope with the condition, the exercises also proved to be an effective method to boost women’s sexuality and improve blood circulation. You can feel the muscles you need to tone up if you try to hold the passing of urine while urinating. The muscles that do the job are located in the perineal area. Now you have to learn to contract and relax the muscles to the utmost; first at a slow pace and then at a fast one. You can exercise anytime and anywhere e.g. while having a walk, watching TV, lying in bed etc.

On the face of it, the abovementioned problems with sex in the puerperal period should not affect women whose babies were delivered by Caesarian section. It is true that the vagina does not undergo any changes in case a delivery is by Caesarian section. However, a site where the placenta was attached to the wall of the uterus needs healing up in this case just like it does in cases of natural labor. Besides, an incision on the lower segment of the uterus will heal up within the same period of time i.e. 4-6 weeks.

In same cases women may experience a lack of sexual desire or feel revulsion towards sexual activity after childbirth due to a number of reasons. Some of the reasons may be quite obvious, whereas others may lie deep in the subconscious.

A decrease in sexual drive is an actuality of nature, by and large. In short, the mother will not be interested in conceiving another child as long as her newborn is unable to survive on his own and has to be looked after. Consequently, there is a drop in the production of estrogens in the female body after childbirth.

Lower estrogen levels result in dryness of the mucous membrane lining the vagina, and therefore a woman will have difficulties making love even if she is sexually aroused. Somewhere in her subconscious a woman may have a desire to take revenge on her partner for all that pain she went through during labor.

Women may have other reasons to avoid sex. Those reasons look more or less evident:

- A feeling of great fatigue (both emotional and physical) which is often coupled with growing resentment a woman feels toward her husband who shirks his responsibilities of being a father. Her sentiments are best expressed in one phrase: “Right now I can’t care less if I have sex or not.”

- A feeling of losing one’s sex appeal after childbirth.

- Postnatal depression or baby blues. It has to do with a state of pathological sadness that sometimes affects a woman soon after the birth of her baby. In most cases the depression is not severe and usually resolves in about two months. Around 10% of women are affected by the condition, which may lead to a significant decrease in the sex urge.

A young mother may be simply afraid of having sex again. The reasons may vary:

- A woman believes that sex will be a painful experience because of that wound in her uterus. A visit to a gynecologist will certainly help in this case.

- A woman is afraid that her baby may wake up at the wrong moment and thus ruin conjugal bliss. Her fears build up and she cannot unwind as a result. A grandma or nanny could be a solution.

- A woman is afraid of getting pregnant again. Please bear in mind that the prevention of unwanted pregnancy can be achieved by various means. There is a large variety of contraceptives to choose from.