Slimmest people in the world live in Tunisia

Tunisia is a multinational country in North Africa. It was a French colony and protectorate for many years. Tunisia is a cross of North Africa and France in terms of gastronomy. Compared with other styles of cooking of the Mediterranean, Tunisian cuisine is arguably the healthiest one. The Tunisians themselves supply the best proof of the statement. One can hardly see an overweight person of Tunisian origin. The local secret of staying slim and trim looks amazingly simple: a diet of vegetables, seafood, mutton, and spices. More importantly, the way all the above are combined and cooked makes a big difference. 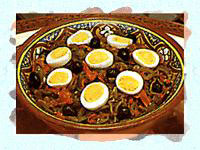 Slimmest people in the world live in Tunisia

Couscous is a traditional North African dish consisting of steamed semolina normally served with vegetables and meat. It is also the national dish of Tunisia and can be prepared in a dozen various ways. Couscous is cooked in a specially designed pot resembling a double steamer. There are several varieties of the Tunisian couscous. A classic type is served with mutton; an exquisite one is served with fish; chicken accompanies a fast yet delicious one; a vegetarian kind is served with vegetables only. Couscous can grace any feast. The dish can enhance the spirit of festivity, it smells and tastes irresistible, and deservedly so. As a rule, couscous sauce, which is a truly important integral part of the food, is served on the side. Arissa, a unique seasoning made of hot peppers and other spices, is another constituent of couscous. The seasoning is added to virtually all the dishes of the Tunisian cuisine.

Tunisians seem to show a special attitude to mutton when it comes to cooking the flesh of both a young and mature sheep. You are likely to change your mind about mutton once you have a bite of a dish called guenaoia even if mutton has sat on the bottom of your list of culinary preferences for a long while. The dish is basically a lamb stew with chilies, okra, red peppers and coriander. Large pieces of a freshly slaughtered lamb are mixed with spices and olive oil. The ingredients are placed in a clay pot sealed with dough. The pot is then put into the sand and a fire is built over the spot. Once the fire burns out, the pot is removed from the sand and opened immediately. The contents of the pot are finally emptied into a huge plate. The hot spicy mixture is best served right away. Koucha is yet another popular Tunisian dish. Actually, it is a whole baby lamb baked in a clay case with rosemary, cayenne pepper, mint, turmeric and salt.

Different varieties of brik are also very popular among Tunisians. Brik is a small turnover of minced beef, fish, potato, or vegetables, and an egg wrapped in thin pastry and deep fried. The hot dish is usually served as an appetizer with spicy arissa sauce.

Tunisian cuisine and vegetables seem to be inseparable. Vegetables can be served in the raw, boiled or steamed. Tunisians are particularly proud of mechouia, an hors d’oeuvre of grilled sweet peppers, tomatoes and onion mixed with lemon oil, tuna fish and hard-boiled eggs. Needless to say, the dish is spiced with arissa seasoning.

One can be served a cup of decent Turkish coffee while in Tunisia. However, local green tea is undoubtedly the best national beverage. In fact, the drink is not made by pouring boiling water on the leaves of tea; it is made by boiling water while changing it several times to start the process anew. Once the brew is ready, it is flavored with a leaf of mint and some almonds. The tasty beverage is reported to have excellent invigorating properties.

Unlike other North African cuisine, Tunisian food is fiery hot because it always comes seasoned with a hearty amount of such spices as anis, coriander, cumin, thyme, cinnamon, saffron, rose water and hot peppers. Tunisians like to cite an old wife’s tale if someone raises the issue of Tunisian cuisine.

The tale says that a husband can judge his wife’s affections by the amount of red peppers she uses when preparing his food. A man may come to the conclusion that his wife no longer loves him if the food becomes bland.