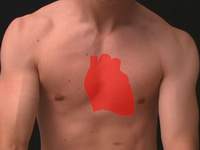 A study of 2,500 men aged 49 to 54 found that having an orgasm at least three times a week cut in half the likelihood of death from coronary heart disease. And barring underlying health issues and the possibility of contracting a sexually transmitted disease, sex can give you a workout. By some estimates, a vigorous sex session can double a person's heart rate and burn up about 200 calories, or the equivalent of a brisk 15-minute run.

9. Women’s heart differs from that of men

Women don't tend to experience the Hollywood-standard heart attack in which gripping chest pain sends you keeling over. Instead, women have reported tightness, aching or pressure in the heart, plus other symptoms like nausea, back and jaw pain.

8. Heart can be created of stem cells

Scientists are studying the red-spotted newt to help them develop cell therapies for humans with physically damaged hearts. This amphibian can turn its cells back in time, as if they were stem cells, in order to build up new heart muscle. In another study, scientists engineered a beating heart from embryonic stem cells in the lab.

7. Horse's heart rates mirror those of human subjects touching them

A recent study adds equine friends to the list of emotionally-responsive animals. A scientist found that horse's heart rates mirror those of human subjects touching them. The horse emotion-detector could someday replace procedures used to measure a patient's stress hormones. Next, the researcher will study service dogs to better match them with humans.

Some people really do have bigger hearts than others. Rather than a sign of affection, an enlarged heart can signal underlying heart disease. The most common type, called dilated cardiomyopathy, occurs when the heart's chambers stretch out and enlarge. The bulging saps the heart's pump power, depriving the body's organs of enough blood. If left untreated, a big heart can lead to heart failure.

5. Laugh increases blood flow for up to 45 minutes

A hearty laugh — the kind that sends a stream of tears from your eyes — does more than warm the soul. Research has shown the guffaw can cause the lining of blood vessel walls called endothelium to relax, increasing blood flow for up to 45 minutes after the laugh attack. Damage to the endothelium can lead to the narrowing of blood vessels and eventually cardiovascular diseases. That's no laughing matter...or maybe it is...

4. Drink to Your Heart

A glass of Merlot can go straight to the heart, and recent research shows that so too can the white variety. Scientists have attributed the heart benefits of reds to grape skins, which are chock full of certain antioxidants. Since the purple-hued skins get removed to make Chardonnays, many scientists had assumed white wine likely wouldn't do the heart any good. A lab experiment on rats showed that a grape's pulp conceals cardio-protective compounds that rival those found in reds. Red or white? Just follow your heart.

3. Heart pumps blood to every cell of the body every minute

In under a minute, your heart can pump blood to every cell in your body. And over the course of a day, about 100,000 heart beats shuttle 2,000 gallons of oxygen-rich blood many times through about 60,000 miles of branching blood vessels that link together the cells of our organs and body parts. That's a hefty job for a fist-sized muscle.

Alas, a broken heart can cause one to swoon. A breakup with a loved one or news of a family death literally can lead to broken hearts in the form of heightened risk for heart attack, studies have shown. Such trauma can also trigger the release of stress hormones into the bloodstream that temporarily "stun" the heart. The resulting symptoms mimic those of a heart attack - chest pain and shortness of breath - but this type of achy heart can bounce back in days with some TLC and rest.

1. Blood-filled muscle weighing in at 10 ounces is a love symbol in many cultures

Weighing in at 10 ounces, the blood-filled muscle called the heart has become the universal symbol of love. The Greeks believed the heart was the seat of the spirit, the Chinese associated it with the center for happiness and the Egyptians thought the emotions and intellect arose from the heart. No one is sure the exact origin of the love association, however. One idea is that the heart got its "love mark" in the ancient Greek city of Cyrene, now in modern-day Libya. The colony was known for a plant called Silphium, with heart-shaped seed pods. Silphium had medicinal properties, and possibly also was used as an herbal contraceptive.