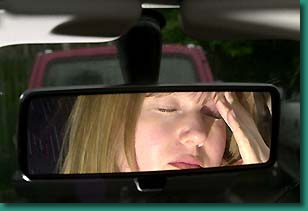 Some may say that driving a car being half-asleep is the problem of a dozing driver only. But in fact a sleepy driver is as dangerous as a drunken one. A driver who does not sleep within 20 hours and more feels the same way that a drunken man does.

Man's driving abilities seriously drop if a driver has not enough sleep every night. It means he will have poor responsiveness and coordination of movements, may commit cause serious problems on roads. As statistics reveals, traffic accidents caused by dozy drivers makes up a bigger share of all registered traffic accidents.

Sleepiness while driving a car is a serious problem of busy women in large cities. The lifestyle today often results in much overload every day: women in cities have to work more than they want and that the female organism allows. As a result, they have little time for sleep. Nowadays, women sleep 20-25 per cent less than women of the previous generations did. So, the problem of not enough sleep has even become chronic with many women in large cities.

There is also a problem with falling asleep which may seriously contribute to day sleepiness. Even if a woman goes to bed earlier before an important day coming she cannot sometimes fall asleep quickly. The problem with falling asleep makes women absolutely exhausted and entails bad mornings. The psychological insomnia troubles even healthy people, and many women have poor sleep because of neurological problems, neurosis and depressions that typical of women. They make women particularly excitable and seriously upset their sleep. Day sleepiness with women may also arise from the premenstrual syndrome that makes women particularly irritable and excitable. Smoking and other bad habits may make sleep worse, however there is no direct dependence of day sleepiness upon smoking.

To overcome day sleepiness while driving a car better have enough sleep before a ride. If all attempts to make the sleep normal fail then visit a doctor. Enough night sleep will help fight day sleepiness.

There are several important recommendations for those drivers who suffer from day sleepiness but still have to drive a car.

A cup of coffee is known as the best way to fight day sleepiness while driving a car. Its effect begins one hour after drinking coffee and lasts for 2-3 hours. It is important to know that coffee after a meal on the contrary makes people even sleepier.

Vegetative adaptogens – ginseng and Schizandra – are known as wonderful toners and lessen day sleepiness. Doctors recommend taking them during spring beriberi and when the organism feels exhausted. Ginseng decoction or tincture taken before driving a car will take sleepiness away for 2-3 hours.

Drivers should better not start on a journey at night or immediately in the afternoon when the biological clock signals the sleeping time for us. No matter if people had enough sleep at night or not, all of us feel sleepy right at these periods.

Have a fellow traveler, better that one who can drive and take your place for some time. Statistics demonstrate that lonely drivers oftener meet traffic accidents.