The Museum of Snoring: snorers are worse than criminals

Composer Johannes Brahms could outdo the whole orchestra with his snoring

It is an open secret that snoring is extremely annoying at night, but it can also make some individuals lose their temper in the daytime. The museum exposition in Alfeld, a small town in Lower Saxony, is wholly devoted to the phenomenon of snoring and methods of fighting with those who snore their heads off. 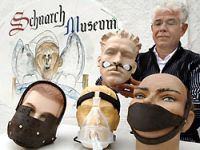 Poet Marina Novikova wrote a witty “Ode to Snoring”, where this disorder was presented as a guarantee of immeasurable love: a woman is ready to forgive her lover for snoring if only he will sleep beside her.

About 20 percent of all adults snore on a frequent basis. The snoring ones include women as well men (the latter especially). The British Snoring and Sleep Apnoea Association conducted a survey which showed that the majority of snorers (and those who sleep beside them) are dreaming of getting rid of this problem. The most common after-effect of snoring is connected with insufficient sleep and waking up tired (81 percent). In many cases snoring causes headache, which can spoil sex life and even lead to divorce. Women, whose partners snore in their sleep, also complain that they do not get satisfaction from sex.

About 400 more or less effective snore remedies are displayed in Alfeld, which is situated not far from Hildesheim (Lower Saxony). Physician and researcher Joseph Alexander Wirth collected them on his own initiative. Not only did he collect them but also exposed them to the public in the local “Museum of Snoring” (“Schnarchmuseum Alfeld”).

One of the army jokes says: “How do you get rid of snoring? – “You should sleep in a gas mask!”

In the museum there is an “anti-snoring mask” which is a hundred years old and represents leather straps that were wrapped around the chin so that the mouth would remain close.

“These are the real torture tools, - Mr. Wirth grins. – During the Independence War in the US a cannonball was sewn down to the inner side of the snoring soldiers' uniforms so that they would not turn over onto their backs and disturb fellow soldiers. A similar method is applied even nowadays, although instead of heavy cannonball thick foam plastic pillow is used or tennis-balls are sewn down to the back.”

Here one can see the so-called “ear suppository” which is paled into the snorer's ear so he would not turn over on his side. Another object represents hollow tubule filled with essential oils, which during the lighting-up get into respiratory tract prevent snoring. Its inventor left on e question unanswered: how do you sleep with this thing? Another case displays prosthetic devices for oral cavity, which help to pull the upper jaw to the front by force. “Pins” for nose, which stretch nostrils to the point when a sleeper gets more oxygen. The devices, which are fastened on hands or legs and start vibrating in the time of snoring. Or the cruelest of all – electroshock.

Many of the odd items in the cabinet of curiosities were gifted to 55-year-old Wirth by his patients. “I kept them in the basement, but then I thought why not to make a museum out of this?” the collector of rarities tells.

He collected the rest of curiosities through the Internet and finally opened “The Museum of Snoring” in 2000. Mr. Wirth was greatly assisted by the local Schlafapnoe society. About thousand of people visit a small house in the residential area of Alfeld every year.  The doctor thinks that “people must come to the museum smiling and leave it having learnt something”.

The snorers may be comforted by the fact that many famous people suffered from the same trouble: British PM Winston Churchill, for instance. The lover of Armenian cognac “warbled” so much at night that lady Churchill escaped from the bedroom in panic. After decades of happy marriage she slept in the bedroom with special acoustic insulation. They say that composer Johannes Brahms could outdo the whole orchestra with his snoring. Some say that physicist Albert Einstein and even the mighty Greek god of wine, Dionysus, were among those who loved to snore.

There is a whole collection of stories and caricatures devoted to this topic in the museum. In addition to books and pictures one can see a variety of dolls and fabric animals, which can snore when squeezed.