Beekeeping was considered one of the most dangerous walks of life in days of old. A beekeeper would find a tree with a beehive and mark it as his property. But the bees would sting their “owner” just like anybody else who dared lay claim to their riches. 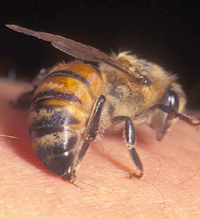 Fortunately, the methods of beekeeping had become less risky by the time when apitherapy was considered to have positive effects on health. Nowadays bee venom for treatment of a number of medical conditions is widely available. From 5,000 to 10,000 patients receive bee venom treatment in the U.S. each year.

Bee venom is a complex mix (50 different components) of a variety of peptides and proteins, not to mention phosphor, calcium, magnesium, copper, formic and hydrochloric acids, fats and amino acids, glucose and fructose, acytilcholine and histamine.

In terms of therapy, the most abundant component of bee venom is melittin, which has a powerful anti-inflammatory action. Adolapine is a more powerful analgesic than a combination of opium and aspirin. Apamine has an invigorating effect on the nervous system, and cardiopeptide acts as a stabilizer for the cardiovascular system.

Bee venom is often administered to those who suffer from arthritis and rheumatic pains. You had enough of that back pain or osteochondritis? Put a bee on the problem part. Bee venom is also claimed to be of use in upset stomach, neuralgias, sciatica, asthma, hypertension, atherosclerosis, and migraine.

Bee venom is used for treating the most precious organ of a male body i.e. a prostate gland. Female patients use it for “stinging” uncomplicated cases of varicose veins and swollen joints.

A Chinese man called Li reportedly overcame his drug dependence by using bee venom. He spent a lot of money and ten years trying to beat his addiction but to no avail. In 1999, he went up to the mountains to live like a hermit. One day he got stung by wild bees. The stings helped him overcome the withdrawal symptoms. Li repeated the use of bee venom every time he felt the onset of malaise. Eventually, he got rid of his addiction for good.

It is not easy to follow suit of the brave Chinese. Apitherapists make a lot of effort in order to lessen the negative effects associated with a procedure. An apitherapist’s office normally has lots of plants and a soft tune playing at the background. A patient is positioned comfortably. A bee is held with tweezers and placed onto a problem part provided that the problem is “close to the surface.” Bee venom therapy is used in combination with acupuncture for treating other ailments lying deeper under the skin. The sting remains in the wound for 10-15 minutes so that it may infuse every bit of the venom into the skin.

A bee sting is painful and the action of venom can last for several days. A bee is disposable in terms of therapy: it dies shortly after leaving a jagged sting in the wound. More than 100 stings at a time is a lethal dosage for man. Reports about persons having a thousand or more stings simultaneously should be seen as an exception to the rule. Besides, those “records” are mostly credited to middle-aged and experienced beekeepers with high levels of immune boosted by years of trade.

Treatment of patients with multiple sclerosis comprises two or three courses per year with a 1.5-2 month interval between the courses. Each procedure will cost 600 rubles.

Bee venom therapy cannot be used by patients with diseases of liver, kidney, spleen. Those with diabetes, cancer, tuberculosis and heart failure cannot use bee venom either. The same applies to patients diagnosed with infectious diseases, heart failure and depletion.

Most centers of apitherapy are located in the vicinity of major beekeeping centers in Bashkiria and the Urals. Apitherapy is also available at Medical and Psychological Center of Individuality in Moscow.

As for honey, it works as an excellent means for stimulating the immune system. A person who consumes five tablespoons of honey a day can be invulnerable to common cold for a long time. We are not taking about honeyed tea – honey dissolved in tea is thought to lose a larger part of its beneficial properties. In the past, physicians used freshly cut pieces of bee cells for antiseptic purposes. Aside from soothing a sore throat, a teaspoonful of honey downed with hot milk will help you fall asleep.

Propolis is a sort of bee glue composed of wax, vegetable resins and ether oils. It has an antibacterial action. Propolis is used as ointment for treatment of wounds, calluses, eczema and some skin diseases.

Royal jelly is a substance produced by feeding future bee queens. The amount of royal jelly is exceedingly small. Bees put only 0.2-0.5 g into a cell. However, royal jelly is rare and expensive for other reasons: it is one of the most beneficial honeybee products. Royal jelly contains 40-58% of proteins; 5-18% of fats; about 26% of sugars and a number of mineral salts, vitamins and other biologically active substances. Royal jelly’s effectiveness is much higher than that of honey. Besides, it has a wonderful invigorating effect on the body.

Pollen is gathered by honeybees for subsequent storing in the cells. Pollen contains about 40% of proteins and around 70% of sugars. It also contains fats, mineral salts, vitamins, ferments and hormones. It is an excellent remedy for preventing colds and depressions if taken before meals.

Honeybee products are good for athletes. However, allergic persons should consult their doctors prior to use any of honeybee products. Honey also contains more than 30 microelements. It can also be used as an antioxidant for improving the skin texture. Warm honey is used for cosmetic masks.

Honey is also worth mentioning as a main component of a sweet and mild alcoholic drink made by brewing and fermenting honey, spring water, with some treacle and herbs added to spice it up. It is an excellent drink for raising spirit and bringing more fun into a party. Besides, it is reportedly hangover- free.