There are about 40,000 bacteria in the mouth of a human being. Not all of them are good for your health. The harmful bacteria lurk in between the teeth and cling to the gums. The majority of bad guys have a ball right on the surface of the tongue because the venue is big, warm, and has plenty of food. 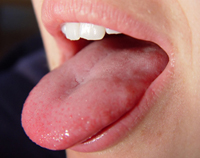 The surface of the tongue is covered with minute projections (papillae), which give it a furred appearance. There are also numerous tiny grooves running across the surface. That is where bacteria huddle in large numbers. Bacteria feed on leftovers and dead cells. The harmful microorganisms attack teeth and gums and produce a typical foul smell, rotten egg-smelling gases or “dragon mouth.” The findings of several studies show that oral debris on the tongue is the root cause of bad breath in 85% of all cases.

Focus on the heart of the matter: run your tongue scraper from the root toward the tip of the tongue. The beasts are thought to behave themselves during the daytime since the majority of them are washed away by saliva rich in acids and oxygen. But things get ugly after dark. The decay process intensifies dramatically since the secretion of saliva drops by 50 times at night. That is why your mouth smells like a pigsty in the morning.

Some doctors recommend that you drink a glass of water right after waking up. They also advise that you take a closer look in your mouth at a regular basis. Those bastards tend to multiply like crazy in no time. The harmful bacteria are easy to see with the naked eye. Your tongue looks coated, especially at the root. Bacteria never accumulate on the front part of the tongue, which is always in contact with the palate.

You are strongly recommended to brush your tongue once you brushed your teeth. The cleansing of the tongue is required for removing bacteria, mucus and microscopic leftovers. It would be ideal if you could clean your tongue in the morning, at night and preferable after meals every day. Well, it is easier than it seems. Give it a try.

A regular toothbrush, preferably a soft one, would do the trick. Apply a few circular movements on the tongue, and dislodge the debris by sweeping it off. Do not put too much pressure while running your toothbrush – the tongue’s tissues are quite vulnerable. At the beginning you can feel like dropping your cookies around the place, especially if you are a smoker. But your system is likely to get used to mechanical tongue brushing in a short while. You can gradually start using toothpaste for brushing your tongue.

Alternatively, you can purchase a special brush for tongue cleansing. The shape of it is more rounded, and its bristles are short and soft. It often comes with a tube of antibacterial gel, which should be used like common toothpaste. Rinse your mouth after brushing the tongue. Refrain from eating for 10 minutes so that the environment of oral cavity may be kept intact.

A special spoon for tongue cleansing is equally effective. It can be purchased in a drugstore. A common teaspoon is another option. Scraping should be done in a regular fashion, from the root toward the tip of the tongue.

The following berry and herb infusions are good for rinsing the mouth after a tongue cleansing session: raspberry, plantain, nettle, and dandelion. You can also use freshly squeezed cabbage, carrot, and lemon juices distilled with water.