It is highly unlikely that any of us stay constantly focused on the way we breathe. Despite similar childhood advice from the parents and doctors who told us to breathe only through the nose and take deeper breaths, all people form their own habits of breathing, which are rather hard to change. Perhaps we are making a serious mistake that has quite an impact on our health. 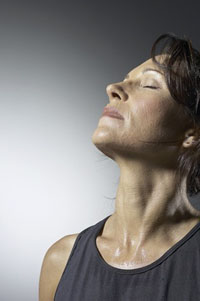 Scientists at the National Institute of Health have put forth a theory that may become a sensational discovery. Scientists believe that breathing holds the key to a secret of blood pressure regulation. According to their theory, a person can significantly reduce the risks of hypertension-related cardiovascular diseases by cutting down on the number of inhalations and exhalations per minute during a small period of time everyday. A person who breathes in and out not more than ten times a minute for a limited amount of time is thought to achieve excellent results.

The research is still in progress. Specialists are currently gathering evidence to back their findings. A special device has been built for research purposes. It helps patients with hypertension to learn a slow breathing technique. The results of a study involving the device look truly impressive. Blood pressure of the patients who used the device for 10 minutes a day during two months decreased by an average of 10-15 points

What are the effects of breathing on blood pressure? First, scientists found out that a slow, regular and deep breathing leads to the relaxation and dilation of blood vessels. However, scientists concluded that the above properties were not good enough for producing such a major and long-lasting effect. “In a way, it still looks like a ‘black box’,” says Dr. William Jay Elliot who heads a part of the research.

A series of tests on animals led to the discovery of a link between breathing and metabolism, which have an impact on blood pressure. It is a well-known fact that a person feels the strong effects of stress on a daily basis. Stress triggers a quickened irregular breathing by reflex. As a result, every breath brings a larger amount of oxygen into the blood. The process has a beneficial effect on the brain activity. On the other hand, too much oxygen in the blood impairs the ability of kidneys to excrete sodium from the body. Sodium plays an important role in blood pressure regulation.

“If you spend lots of time behind your desk and consume food with an increased salt content, your kidneys will be less efficient in removing that salt from your body. You can improve the situation by taking regular walks in the forest,” says Dr. David Anderson who does research on the links between hypertension and human behavior.

If the theory holds water, the new findings will shed some light on the relationship between breathing, life style, diet and blood pressure. A simple yet effective breathing technique will probably help combat myocardial infarction, stroke, kidney failure, blindness and many other diseases and conditions caused by hypertension. Hypertension was dubbed a “quite killer” by doctors all over the world because patients affected by the disease may feel no manifest symptoms until substantial damage is done and they suddenly find themselves in a life-threatening condition.