We use our hands everyday and it is almost impossible to imagine our life without them. But what do we know about our most active parts of the body. The following are the most interesting facts about our hands and arms: 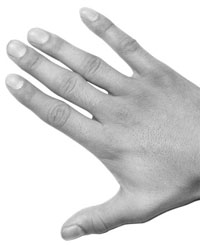 There are no muscles in your fingers. The muscles that move your fingers are located in the palm and up in the mid forearm. They're connected to the finger bones by tendons which pull and move the fingers like the strings of a marionette.

The Hand has been used as a symbol of protection since ancient times.

Your fingernails grow about the same amount as the Continents move every year.

It takes 6 months for your fingernails to grow all the way from the root to the tip. Your toenails take 2-3 times as long.

The longest Fingernails ever belonged to Shidhar Chillal. They were 20 feet, 2.25 inches! It took 48 years to grow them.

One third of all acute injuries seen in emergency rooms involve the upper extremities.

One fourth of athletic injuries involve the hand and wrist.

When the hand is kept wet, the skin of the palm wrinkles. Why? The exact mechanism is not known, but it is clearly controlled by nerves. When the nerve which supplies feeling to an area of skin on the palm is cut, that area of skin not only becomes numb, loses its ability to wrinkle when wet. It also loses the ability to sweat.

White children are four times more likely than black children to be born with webbed fingers.

Black children are ten times more likely than white children to be born with extra fingers.

About a quarter of the motor cortex in the human brain (the part of the brain which controls all movement in the body) is devoted to the muscles of the hands.

The finger bones are straight on the back side, but curved on the palm side. When we bend our fingers into a fist, the finger bones produce a shape similar to a circle in a square, round on the inside, square on the outside.

During the Gallic wars, Julius Caesar ordered the thumbs of captured warriors amputated so that when they returned to their country, they would serve as examples and be unable to bear arms again. This practice was later used in a number of wars and in the slave trade.