A lot of people find the idea of eating fast quite attractive: it saves time and money. Dry noodles take a top position on the list of fast meals: it takes mere minutes to make a hot and tasty container of noodles for a lunch break. However, the majority of people develop an aversion to dry noodles if they have them for lunch for more than two days. Television adverts say that dry noodles are a perfect substitute for nutritious lunch. This statement misleads a lot of people, but the noodle business is rather profitable: 43.7 billion of dry noodle dishes were eaten in 2003 worldwide. 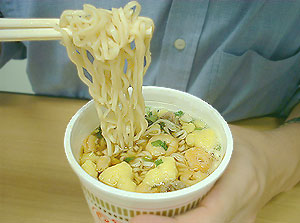 Dry instant noodles were born in Japan: the company Nisshin Food Products invented the miraculous food in 1958. The new dish won immense popularity very quickly and was even recognized as the best Japanese invention of the 20th century (it was revealed as a result of a special opinion poll). Instant noodles appeared on the Russian market after the fall of the “iron curtain” and became very popular too. The success was achieved owing to low prices, bearable taste and the minimum of efforts that the product required for cooking. Russian food makers did not lose the new trend out of their sight and offered a variety of dry products to Russian consumers.

Dry noodles are basically made of water and flour: they roll dough into little “tubes,” mince them and expose the noodles to steam. When the product is cooled, they fry it a little to get rid of moisture. Packs of dry noodles usually depict pieces of meat, chicken, vegetables and shrimps, although none of these delicacies can be found inside, as a rule. Dry noodles are usually packed with little packs of spices and powder, which gives the product the taste of meat or shrimps. Noodle makers do not promise any beef or chicken: they usually write “chicken-flavored,” for example. Pork-flavored noodles may contain not only bean protein, but the powder concentrate of pork paste at best. Other producers may even describe the image that they use on the package: they specify that the image represents just a way the noodles can be served. Russian noodle makers have an opportunity to invent as many ways of table appointments as possible: there is no law in Russia to regulate a strict correspondence of what can be seen on a package and inside it.

Vacuum-dried meals or instant meals cannot be called “normal” or “nutritious” food. Dry food is high-calorific, but it hardly contains any vitamins or proteins – only carbohydrates. Additives and powders that can be found in every container or pack of dry noodles simply enrich the taste and make the product last longer. They stir up appetite and may even result in heartburn, discomfort in the stomach or digestive distress.

Dietitians say that occasional consumption of dry noodles is not harmful. Having dry noodles for lunch on a regular basis will inevitably lead to digestive problems. In addition, such products may affect the liver and the pancreas. Specialists of the Institute for Nutrition of the Russian Academy of Sciences say that the daily consumption of instant products may result in stomach ulcer or gastritis. Furthermore, vacuum-dried food worsens the general condition of the human organism, inciting vascular and immunity problems, not to mention beriberi (vitamin deficiency disease) and shortage of minerals. Almost all instant products may lead to such lamentable consequences.