Bird flu likely to take the form of global epidemic

If it comes into contact with the human flu virus, it may kill not only hundreds, but millions of people worldwide 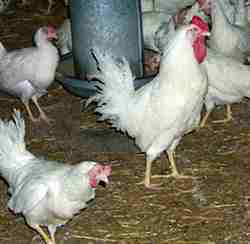 Bird flu is a contagious disease, which presumably infects birds and pigs. There are two kinds of the disease with birds. The first one of them is a light form, which manifests itself in the reduction of laid eggs, and the worsening of feather condition. A more serious form of the disease is called 'bird flu of high contagiosity.' The first occurrence of the ailment was registered in Italy in 1878. The acute form of the disease causes highest death tolls among infected birds – in almost 100 percent of cases. The infection spreads from wild ducks that swim in ponds next to domestic birds. Birds carry infection in their intestines, that is why birds' faeces and saliva are highly contagious. Bird flue is contagious for humans too – a person, who regularly takes care of birds, may catch the infection via the respiratory tract.

The first serious outburst of bird flu epidemic was registered in 1997 in Hong Kong, when the disease struck over 20 individuals, six of them died. Doctors decided at first that it was a new form of human flu, although it turned out later that the infection had been caused with a subtype of the virus observed only with birds. The government of Hong Kong took resolute measures the same year: about 1.5 million hens were exterminated nationwide. It was even decided to liquidate a certain amount of pigeons and other kinds of birds. The epidemic appeared in Hong Kong again two years later, although it did not kill any people: two infected children recovered from the ailment. Several individuals were infected with H9N2 virus the same year in China. A couple from Hong Kong caught bird flu last year, during their trip to China. One of the people died, the other one recovered. H7N7 virus infected over 80 people in the Netherlands – farmers and their families. The epidemic did not have serious consequences, although it killed one individual, a veterinary.

In 2004, bird flu was spread basically in all Asian countries: in Vietnam, Cambodia, China, Laos, Indonesia, Pakistan, Korea, Thailand, Taiwan and Japan. The infection was registered among European, American and Israeli citizens, who went on trips to China, Vietnam, Singapore, Thailand and the Philippines.

The constantly-mutating virus has about 200 variances now, which makes it impossible to develop a vaccine against it. Specialists believe that the disease may become even more dangerous than the notorious SARS virus. The bird flu virus is capable of living even in dead birds for up to 12 months. If it comes into contact with the human flu virus, it may kill not only hundreds, but millions of people worldwide. Such a combination can be spread in the world very fast and reach a global scale in perspective.

However, there has been no convincing evidence found to prove that the virus can be transmitted from one individual to another. The only exception was found in Thailand, although medical specialists did not register the incident as a consequence of such transmission. An infected woman was in contact both with infected birds and her relatives, who caught the disease from her too. That is why, it is difficult for specialists to find out, which contact in particular led to the contagion.

British researchers say that the present-day bird flu virus is similar to the Spanish virus, which raged in the beginning of the 20th century and killed over 20 million people all over the world.

Symptoms of bird flu are reminiscent of common flu: high temperature, fever, heavy breathing and strong muscle pain. The virus quickly causes pneumonia, it leads to severe complications, which deteriorate presumably heart and kidney. One may catch bird flu from contacted an infected bird. The virus stays alive in frozen poultry, although it dies at high temperatures: in boiling water or on a red-hot frying pan. Therefore, it is possible to eat infected poultry, if it is cooked properly. Asian countries do not supply poultry to Russia – it is available only in the Far East, in very small quantities.