An unidentified disease has broken out in the town of Ode-Irele, in Ondo State in SE Nigeria, killing around 18 people, according to reports confirmed by the Nigerian health services, the deaths occurring within 24 hours of the onset of symptoms. A local chief has however explained the cause is divine revenge from the God Molokun. 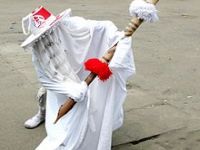 The symptoms are reported as a severe headache, followed by blurred vision, then blindness, lack of consciousness, weight loss and death within 24 hours. All of the cases occurred between April 15 and April 17 and were all localized in the same area, around and inside the town of Ode-Irele.

The Nigerian Health Ministry and the World Health Organization have sent officials to the area to try and find out what is causing the illness. Tests have been made on several people showing symptoms and to date no known virus has been identified, including Ebola Virus Disease.

Reports vary from 14 to 28 people infected and dead. It appears the illness spread rapidly among the people infected by what the local health officials term "a disease". It appears the disease attacks the central nervous system - but all the cases seem to have occurred in a two-day period and no further cases have been reported in the last 72 hours, neither are there cases hospitalized, according to the health authorities.

However, a local chief has explained what he believes caused the illness and it has nothing to do with conventional medicine. Chief Moses Enimade claims that it is a punishment from the God Molokun for the sacrilege committed by a member of the local community against this local Earth deity.

Moses Enimade is the Oyewoga, second in charge beneath the Oba (community leader) Cornelius Olanrewaju-Lebi, says that recently local youths entered the shrine of Molokun, the deity of the land, when "Only the Chief Priest and High Chief Gboguron are qualified to enter the shrine". The youths stole some traditional items to use in a money ritual, thinking they would give them more power to get rich.

The Oyewoga stated that a sacrifice must be made before entering the inner room of the shrine where the traditional items are kept and then only the Chief Priest and High Chief Gboguron are allowed inside, not even the Oyewoga or the Oba.

He said the people died because they committed sacrilege and if the families bury these youths, their bodies will be exhumed and they will have traditional funeral rites said over them to appease Molokun, otherwise more people in the area will be struck down.

Oyewoga Enimade said that the prophecy of Molokun is contained in the book of Proverbs, 29:1: "Whoever remains stiff-necked after many rebukes will suddenly be destroyed-without remedy".

Other mystery diseases have been reported around the world, among which is the case of 24,000 deaths since the year 2000 between Southern Mexico and Panama in Central America, causing kidney failure; Bihar State in India, where a kind of encephalitis killed 47 victims in 2011 and 233 in 2012; Nodding Syndrome, in Sudan, Tanzania and Uganda, which has been known since the 1950s and which has affected thousands of people.